The latest news in the world of video games at Attack of the Fanboy
July 24th, 2015 by Damian Seeto 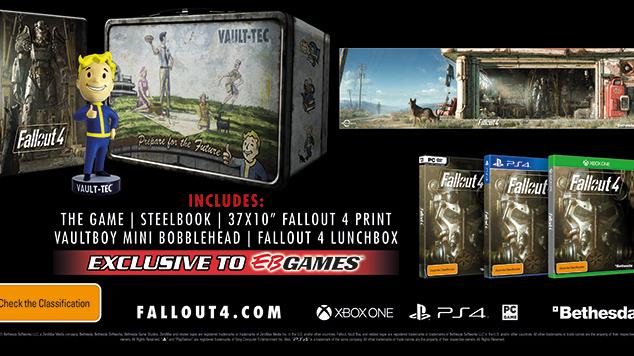 The new collector’s edition is called the “Fallout 4 EB Games Nuke Pack”. This version of the game is exclusive to EB Games.

You can pre-order it now for the PC, PS4 and Xbox One. It comes with a few things that aren’t featured in other versions of the game.

The Nuke Pack includes: Steelbook, 37 x 10″ Fallout 4 Print, Vaultboy Mini Bobblehead and a Fallout 4 Lunchbox. You also get the game itself obviously.

This is different from the Pipboy edition and even the Mighty Bundle that was revealed for New Zealand customers a few days ago. The Nuke Pack is actually available at the New Zealand branch of EB Games as well.

It will cost you $124.99AUD in Australia and it’s $149.99NZD in New Zealand. It’s more expensive than the standard version of the game, but the extra goodies are cool enough to justify the higher price. It’s also less expensive than the Pipboy editions.

As far as I can tell, the Nuke Pack editions are still available for Australian and New Zealand gamers. They are not sold out yet like how the Pipboy editions were snapped up quickly.