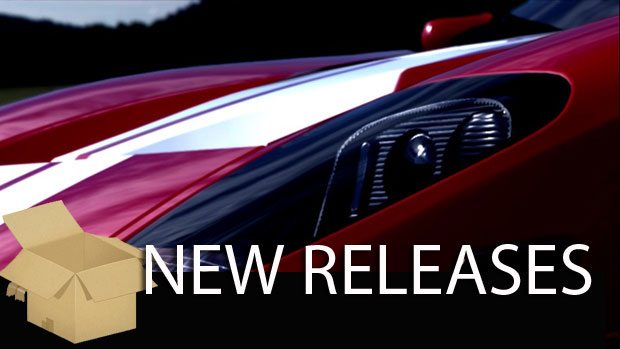 These are your video game releases for the week of October 10th, 2011.

Forza Motorsport 4 – (Xbox 360) – Forza Motorsport, the highest rated racing franchise of this generation, makes its return to the race track in Fall 2011 with Forza Motorsport 4. The definitive racing game of 2011, Forza Motorsport 4 brings together genre-defining, controller-based racing, the power and freedom of Kinect, and content from leading brands like Top Gear to create an automotive experience unlike anything before it.

Dead Rising 2: Off The Record – (PC, PS3, Xbox 360) – Dead Rising 2: Off The Record is a reimaging of the zombie outbreak in the third-person Action game Dead Rising 2, this time featuring the original series protagonist, Frank West. The overall scenarios unleashed on the game world parallel those of the original release, but with the return of Frank West, the series also returns to the more lighthearted tone of story and gameplay. The game features: new missions, enemies, weapons combos and items / vehicles, a Sandbox Mode designed for exploration, co-op gameplay and Prestige Points and missions leveraging Frank’s photography skills.

Ace Combat: Assault Horizon – (PS3, Xbox 360) – Developed by the Project Aces team, Ace Combat: Assault Horizon intensifies the franchise, escalating combat to the next level with aircraft that are literally torn apart, spewing oil and debris across the sky. Players will engage in combat across the globe, dodging skyscrapers, and turning their enemies into fiery supersonic debris in both single player and online multiplayer. Never before has combat been so fast and in-your-face.

Red Dead Redemption GOTY – (PS3, Xbox 360) – Red Dead Redemption is a Western epic, set at the turn of the 20th century when the lawless and chaotic badlands began to give way to the expanding reach of government and the spread of the Industrial Age. A follow up to the 2004 hit Red Dead Revolver, this game tells the story of former outlaw John Marston, taking you on a great adventure across the American frontier. In addition to the award-winning original game, the Game of the Year edition of Red Dead Redemption comes packed with additional bonus content, including the add-on packs Undead Nightmare, Legends and Killers, Liars and Cheats Pack, Hunting and Trading Outfits Pack, Outlaws To The End Co-Op Mission Pack, Solomon’s Folly, and Myths and Mavericks.

Orcs Must Die – (PC) – Slice them, burn them, skewer them, and launch them – no matter how you get it done, orcs must die in this fantasy action-strategy game from Robot Entertainment. As a powerful War Mage with dozens of deadly weapons, spells, and traps at your fingertips, defend twenty-four fortresses from a rampaging mob of beastly enemies.

Dance Dance Revolution II – (Wii) – DanceDanceRevolution is back and better than ever with this incredible follow-up to the game that ruled parties, dominated the arcade scene and captured the hearts — and feet — of aspiring groovers around the world. With new music, modes and functionality and new dance characters to get into the groove with, DanceDanceRevolution II is sure to get your body moving and your feet dancing.

Dragon Age II “Mark of the Assassins” DLC – (PS3, Xbox 360, PC) – Embark on a thrilling adventure of deception and intrigue in Mark of the Assassin, the latest downloadable expansion for Dragon Age II. In this gripping new story, Hawke is joined by a mysterious elf assassin, Tallis. Voiced by none other than actress Felicia Day, this new party member comes complete with her own unique combat style and intriguing back story.

Hulk Hogan’s Main Event – (Xbox 360) – Get pumped and bring the pain in the first full-body wrestling game on Kinect for Xbox 360! Hulk Hogan’s Main Event is an epic no-holds barred fighter that lets Hulkamaniacs train with wrestling icon Hulk Hogan himself. As your mentor, Hulk will help you build your own wrestling personality and school you in the art of showmanship to win over the crowd. Entertain roaring fans with brutal stunts, combos, even devastating chair hits, that will knock your opponent to the mat or out of the ring. The crazier and wilder your motions, the more high impact your wrestling performance is in your living room ring!

Kinectimals: Now with Bears! – (Xbox 360) – Your family gets bigger in this extended release of Kinectimals. Joining the original feline cubs, now play with cuddly bear cubs as you solve a new mystery on an undiscovered island! Share exciting adventures and fun challenges as you teach your best friends new tricks using your voice and body to interact naturally with them.

Michael Phelps: Push The Limit – (Xbox 360) – Take a competitive sports journey with one of the most celebrated athletes in history through Michael Phelps: Push the Limit, the first controller-free swimming experience to capture your true movements and translate them into accurate game play. The game utilizes Kinect for Xbox 360’s unique capabilities to let you go beyond the pool in one of the most realistic and intense sports simulations ever created. The entirely new game play mechanic lets you accurately master the action of gold medal swim strokes and learn techniques that help Michael Phelps dominate his sport. With one-hundredth of a second often the difference between winning and losing, every stroke’s importance is amplified and the room for error is razor thin.

The Cursed Crusade – (PS3, Xbox 360) – Set at the end of the 12th century and centered around a pair of cursed warriors fighting to save their souls, The Cursed Crusade marries the beauty and wonder of medieval Europe with thrilling adventure and dark fantasy.

Wipeout 2 – (PS3, Xbox 360) – Summer thrills and Winter Chills!  The Big Balls are Back, with even more zany and crazy family fun!

Might & Magic Heroes VI – (PC) – Might and Magic Heroes VI is multiplayer Turn-based Strategy game for the PC platform. The sixth game in the fantasy based Might & Magic series, Might and Magic Heroes VI is a prequel to the previous game in the series. Set in the realm of Ashan, it revolves around the resurrection of a long-dead Archangel, needed in a current time of war, but who may also have his own ideas and ambitions in a brave new world. Game features include: an extensive list of building possibilities, RPG elements, a deep list of possible artifacts and relics to discover, a reputation system, a sizable selection of factions and more.

Rune Factory: Tides of Destiny – (PS3, Wii) – Azel and Sonia are two lifelong friends enjoying a tranquil life on Finith island until they’re struck by a mysterious curse. They awaken to find both of their souls trapped in the same body! On top of that, the Finith they knew is gone, and in its place is a strange island populated with unfamiliar faces. Only by exploring this new world will they be able to solve the mystery of this curse that has befallen them. In their quest, Azel and Sonia will be aided by a colorful cast of characters, and take command of the towering golem Ymir. Using Ymir, they’ll cross vast seas, discover hidden islands, and battle fearsome monsters of the deep!

Harvest Moon: The Tale of Two Towns – (3DS, DS) – Harvest Moon 3D: Tale of Two Towns is a Life Simulation Role-playing Game (RPG) for Nintendo 3DS. The game features classic Life Sim gameplay involving farming, the raising and care of animals and eventual marriage. In the 3DS version players will also enjoy optimized and adjustable 3D graphics, an animal petting mini-game and the ability to wirelessly swap items and crops with other players. Additional features include an all-new storyline involving the player in an ongoing between two towns, the ability to play as either a boy or a girl, an in-game quest bulletin board system, wireless functionality allowing you to visit friends in-game fields, new in-game activities and more.

Marvel Super Hero Squad: The Infinity Gauntlet – (3Ds) – Hero up in 3D! Join Iron Man, Hulk, Wolverine and the Squaddies to collect six Infinity Stones from the villains who would use them to dominate or destroy the universe! falling into the wrong hands. Use unique powers and super smarts to overcome dastardly villains. Match up heroes against enemy combatants and unleash high-octane battles as you fight your way to victory in this adventure game inspired by the action-packed animated Marvel TV series.

Aliens: Infestation – (DS) –  The Aliens universe provides a setting full of horror, suspense and action. Using authentic environments inspired by the film series including the Sulaco and LV-426, the player will be immersed in an eerie, atmospheric world where any moment could bring their death.