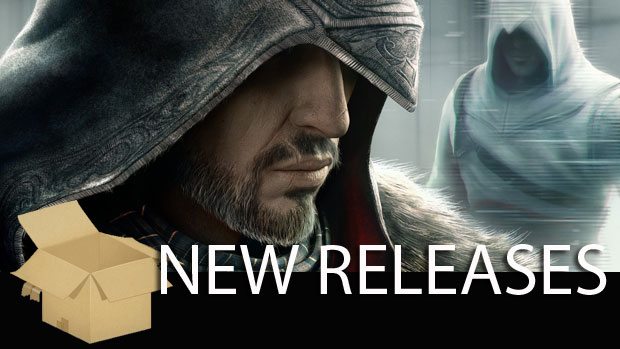 These are your video game releases for November 14th, 2011.

Assassin’s Creed: Revelations – (PS3, Xbox 360, PC) – When a man has won all of his battles and defeated all of his enemies; what is left for him to achieve? Ezio Auditore must leave his life behind in search of answers, in search of the truth. In Assassin’s Creed® Revelations, master assassin Ezio Auditore walks in the footsteps of the legendary mentor Altaïr, on a journey of discovery and revelation. It is a perilous path — one that will take Ezio to Constantinople, the heart of the Ottoman Empire, where a growing army of Templars threatens to destabilize the region.

Saints Row:  The Third – (PS3, Xbox 360, PC) – In Saints Row: The Third, fame and fortune come at a bittersweet price for the kings of Stilwater. Faced with serious demands from the legendary criminal fraternity, the Syndicate, the Saints must hit the streets of Steelport to trample their new rivals — and defend their status. Get ready for intense action, grueling gang violence and outlandish situations to spare as you take on a decaying city of sin in an all-new battle with the Saints. Buckle up and take a massive tank on a wild ride — through the sky. Duke it out against trained military forces and call in a strategic airstrike on a Mexican wrestling gang. With grit and guts galore, you and your gang will never kneel to an enemy. After all, just because you’re a Saint doesn’t mean you have to behave.

Halo: Combat Evolved Anniversary – (Xbox 360) –  Combat Evolved Anniversary is a spectacularly remastered version of the original “Halo” campaign, created in celebration of the 10th anniversary of one of the most beloved franchises in gaming history. With a bounty of new features including cooperative play over Xbox LIVE, a bundle of some of the most beloved multiplayer maps in “Halo” history reimagined for Xbox LIVE, new challenges and a new story to uncover, Halo: Anniversary is a must-have experience.

Need For Speed: The Run – (Xbox 360, PS3, PC, Wii, 3DS) – On one side of this country lie the Golden Gate Bridge, Alcatraz and cable cars — on the opposite coast there are massive skyscrapers, the Statue of Liberty and the endless glow of Times Square. What separates these two great cities is nearly 3,000 miles of roadway through dense urban centers, over epic mountains, across arid deserts and in constricted canyons.

Ultimate Marvel vs Capcom 3 – (PS3, Xbox 360) – The Marvel and Capcom universes collide once again in this Ultimate installment of the popular fighting franchise. With new fighters, epic new modes and rebalanced gameplay, Ultimate Marvel vs. Capcom 3 asks only one question — are you ready for the Ultimate fighting experience?

Jurassic Park: The Game – (Xbox 360, PS3) – Jurassic Park: The Game takes place during the events of the original movie. Dennis Nedry’s attempt to smuggle priceless dinosaur embryos off Isla Nublar failed; the container disguised as a Barbasol can is missing. As the park falls into the chaos unleashed by Nedry’s theft, forces that will stop at nothing to gain the invaluable biotech created by InGen arrive to claim their prize. Meanwhile InGen dispatches mercenaries to rescue employees. When these human forces collide, it becomes clear that dinosaurs aren’t the only things to worry about! Jurassic Park: The Game explores new and familiar dinosaurs and areas of the park to deliver the ultimate adventure – 65 million years in the making!

Rayman: Origins – (PS3, Xbox 360) – Rayman Origins is a multiplayer Action-Adventure Platforming game which explains the origins of Rayman and details how he became the hero of his video game series. Designed both for new fans of Rayman and longtime players, the game is set in the gameworld of the “Glade of Dreams” which is literally being torn apart by nightmares that are transforming it. With the help of his friend Globox and two wizards known as teensies Rayman must use his platforming and puzzle-solving skills to save the day. Additional features include: 60 game levels, 12 unique worlds, 100+ characters and 4-player co-op gameplay support.

Bejeweled 3 – (Xbox 360, PS3, DS) – The biggest, brightest Bejeweled® ever! Discover all-new ways to play the world’s #1 puzzle game. Find your perfect match with 8 breathtaking game modes that meet all your moods — ease into Classic Bejeweled for cascades of fun, journey through 40 challenging Quest puzzles, charge into the electrifying Lightning for non-stop action, and tailor your experience in Zen for a revolutionary new way to relax.

The Legend of Zelda: Skyward Sword – (Wii) – The Legend of Zelda: Skyward Sword introduces full motion control enabled by the Wii MotionPlus accessory, which synchronizes your movements with Link’s actions while offering intuitive play control. With the Wii MotionPlus accessory, every movement of Link’s sword matches your motion with exact precision. If you motion left to right, Link swings from left to right. The precision play control is applied to enemies as well, as you must contemplate strategy when battling opponents that actively try to defend against attacks.

Cooking Mama 4 – (3DS) – She cultivated your green thumb in Gardening Mama, turned your world into a work of art in Crafting Mama, and rocked the little ones to sleep in the innovative Babysitting Mama, but Mama’s talent is truly unparalleled in the kitchen. The original video game chef is whipping up all kinds of fresh fun in her 3DS debut. From new recipes and ways to play to exciting kitchen activities and dish combinations, the iconic kitchen cutie has some tricks up her sleeve that will magically transform kitchen newbies into master culinary artists!

LA Noire The Complete Edition – (PC, PS3, Xbox 360) – L.A Noire is an interactive detective story set in the classic noir period in the late 1940’s blending action detection and complex storytelling and draws into an open ended challenge to solve a series of gruesome murders. Set in a perfectly recreated Los Angeles before freeways, with a post war backdrop of corruption , drugs and jazz, L.A. Noire will truly blend cinema and gaming.