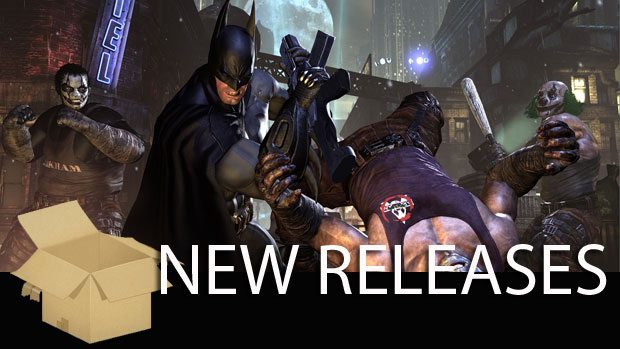 Here are your video game releases for the week of November 21st, 2011.

Batman: Arkham City – (PC) – Batman: Arkham City is third-person Action-Adventure game that delivers an authentic Dark Knight experience rooted in an original and engrossing story as well as a combination of melee combat, stealth, investigative and speed-based challenge gameplay. A sequel to 2009’s Batman: Arkham Asylum, Arkham City features the full range of classic enemies seen in the previous game, in addition to Catwoman, who is a playable character and has her own storyline in the new release. Additional features include: a range of new gadgets, an increased number of possible melee opponents and a range of movement options for Batman that include leaping, sliding, gliding and the grapple hook.

Minecraft – (PC) – Minecraft is a sandbox construction game, inspired by Infiniminer, Dwarf Fortress andDungeon Keeper, created by Markus Persson, the founder of Mojang AB. The game involves players creating and destroying various types of blocks in a three dimensional environment. The player takes an avatar that can destroy or create blocks, forming fantastic structures, creations and artwork across the various multiplayer servers in multiple game modes.

Magicka: The Stars are Left – (PC) – Magicka is a satirical action-adventure game set in a rich fantasy world based on Norse mythology. The player assumes the role of a wizard from a sacred order tasked with stopping an evil sorcerer who has thrown the world into turmoil, his foul creations besieging the forces of good.  Players will be able to combine elements to cast spells, wreaking havoc and devastation on the minions of darkness. They will also be able to team up with friends and fight their way through the campaign, or test their skills in the magickal arts through other challenging modes.

Sonic Generations – (3DS)  – Play as both Classic Sonic and Modern Sonic in the ultimate Sonic experience. Master the moves of each character as they race through each environment on their own specially designed track.

WWE All Stars – (3DS) – Take WWE Action To The Next Dimension! WWE All Stars Delivers Fast, Fun, Fluid And Furious Arcade-Style Gameplay To The Nintendo 3Ds! Featuring Your Favorite Colorful WWE Legends Of The Past And Larger-Than-Life WWE Superstars Of Today, WWE All Stars Delivers The Greatest Roster Ever Assembled In A WWE Videogame! Step Inside The Virtual Ring And Experience WWE Action In The Palm Of Your Hand, For The First Time Ever In 3D! The Greatest Matchups Haven’t Happened Until Now!

Final Fantasy V – (PSN) – Centered around a group of four strangers brought together by circumstance to save the Crystals that have mysteriously begun shattering one by one. Eventually it is revealed the one behind the phenomenon is the villain Exdeath, as part of a plan to release himself from his imprisonment and to gain the power of the Void, a realm of nothingness, which could bestow absolute power on one able to resist being absorbed by it. The four thus turn their attentions to defeating Exdeath and stopping the Void’s unstable energies from consuming their world.

Serious Sam 3: BFE – (Xbox 360, PS3, PC) – Serious Sam 3: BFE is a glorious throwback to the golden age of first-person shooters where men were men, cover was for amateurs and pulling the trigger made things go boom. Serving as a prequel to the original indie sensation, Serious Sam: The First Encounter, Serious Sam 3 takes place during the Earth’s final struggle against Mental’s…

Jimmie Johnson’s Anything with and Engine – (Wii) – NASCAR star Jimmie Johnson has risen through the ranks and captured checkered flags, and now he’s got his sights set on another type of racing. Instead of racing pristine vehicles at Daytona or Talladega, you’ll find yourself behind the wheel of something more unique — a dumpster, a lawn mower or maybe even a shopping cart. Your vehicles can be modified too, with mines, missiles, side-rams and more. As long as it has an engine, you can race it.

WWE 12 – (PS3, Xbox 360, Wii ) – You love the Superstars, Divas and Legends. You watch every move, captivated by the high-flying stunts and twisting, turning storylines. The slap of the mat. The roar of the crowd. The booming echo of your favorite performer’s taunts and jeers as his or her voice resonates throughout the arena. Now, the renowned franchise has been reborn — here come the wrestlers crashing into your living room.

Jillian Michaels’ Fitness Adventure – (Xbox 360) – Jillian Michaels, red hot health and wellness icon, best-selling author and co-host of ‘The Doctors’ makes her debut on Kinect for Xbox 360! Get ready to use your entire body this time as players join Jillian on an interactive adventure, which of course will also be filled with Jillian’s trademark intensity! Jillian Michaels’ Fitness Adventure, the latest iteration of the Jillian Michaels franchise, takes your fitness routine beyond a basic workout and turns it into a real adventure through a mission-based journey set in a lush jungle temple environment. The high-energy and fully customizable motion-based experience offers a thrilling personal training experience that you can only expect from teaming up with Jillian to achieve your fitness goals.

Karaoke Revolution: Glee 3 – (Xbox 360) – Last season, you were a newbie to the drama, the competition and the slushies that go along with being a Gleek. But this is season two, and you can sing your way through anything that might come your way — whether it’s a Britney Spears invasion, the Time Warp, a beastly new football coach or your old arch nemesis, Sue Sylvester. School is back in session at McKinley High — so sharpen your pencils and your vocal skills and get ready to shine like never before in an all-new volume of Glee performances.

The King of Fighters XII – (Xbox 360, PS3) –   With the triumphant return of fan favorite characters like Mai, K’, and Vice, extensive refinement of the core fighting engine based on community feedback, and vastly improved network functionality, The King of Fighters XIII represents the HD entry in the series that fans have been waiting for.