New This Week in Video Games | Neverdead is Pretty Bad 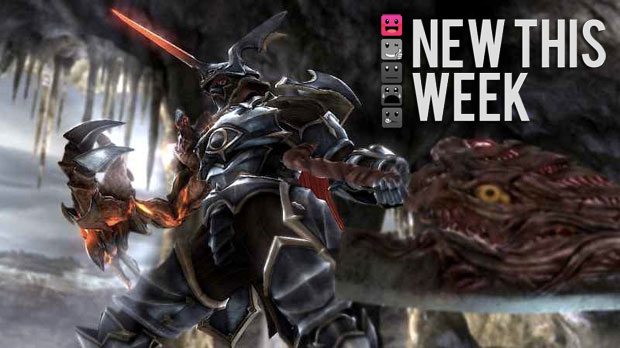 Here are your video game releases for the week of January 29th, 2012.

Soul Calibur V – Xbox 360, PlayStation 3 – SOULCALIBUR V is the latest entry in the premier weapons-based head-to-head fighting series. SOULCALIBUR V takes place 17 years after the events of SOULCALIBUR IV and continues the epic story of warriors in search of the legendary Soul Swords in 17th century Europe. The heroic battles transpire in a beautiful and fluid world with eye-popping graphics and visual appeal. SOULCALIBUR V tunes the battle, movement, and visual systems so players can pull off cool dynamic attacks with ease and battle with complete freedom.

Final Fantasy XIII-2 – PlayStation 3, Xbox 360 – FINAL FANTASY XIII-2 is the follow-up to the 2010 hit title FINAL FANTASY XIII, and the latest installment in the world-renowned FINAL FANTASY series, which has shipped over 100 million units worldwide. The all-star production staff returns to create a true sequel that offers a more immersive experience than its predecessor, with extraordinary level design that encourages exploration, a more strategic paradigm-based Active Time Battle system, the ability to tame monsters and have them fight in your party, and a multi-path, player-driven experience that offers significant replay value.

NeverDead – PlayStation 3, Xbox 360 – Over 500 years have passed since a mortal named Bryce Boltzmann endured a life-altering tragedy at the hands of Astaroth, the Demon King. His wife murdered, left defeated and rendered immortal, he now moves through life without aspirations other than where he will find his next drink.

Age of Enigma: The Secret of the Sixth Ghost – PC – Discover the world of Enigma…THE DEAD HAUNT THE LIVING! Paranormal activity and numerous freakish events stalk the land and terrorize the population. Seemingly, the dead haunt the living and take possession of their homes… In 1947, small-town girl Ashley Reeves discovers she has a talent to connect with the supernatural. She dreams about a child who’s being held captive in an old mansion. Upon investigation she finds a house full of restless ghosts. Help Jessica release the bizarre spirits to the hereafter, while saving the life of the young girl in her dreams.

Dead Island: Ryder White DLC – PlayStation 3, Xbox 360, PC – The island of Banoi is a lush, tropical paradise in the South Pacific where its flagship Royal Palms Resort serves as the ultimate getaway for vacationers with money to burn. However, all good things must soon come to an end – and the picturesque resort falls into madness, carnage and chaos after a mysterious and contagious zombie outbreak claims its once peaceful atmosphere. Cut off from the rest of the world, only four individuals who strangely find themselves immune to zombification have the power to protect the remaining survivors from the horrors of the island, to discover what’s really going on and find a way to escape before their own fatal ends.

WWE 12: Legends and Superstars DLC – PlayStation 3, Xbox 360 – The popular WWE franchise returns in an exciting new edition with WWE ’12. The new Predatory Technology gameplay system will have your knees shaking as you feel like you’re truly in the ring with the most fluid, dynamic, realistic and action-packed WWE simulation to date. Enjoy new and improved gaming features, including the Breaking Point submission system, new attributes, control layout, momentum and stamina.

Happy Action Theater – Xbox 360 – Are you annoyed at how little magic you are able to shoot from your fingers? Have you ever tried to get grandma to do the worm, but all she would do is just stand there? Have you ever noticed how your living room doesn’t have any hot lava in it? And who designed this living room anyway?! It doesn’t even have any buildings to smash! Well, Double Fine Happy Action Theater can solve all of these problems and more!