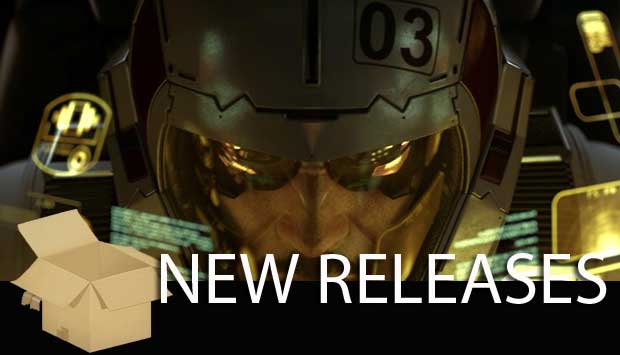 The latest video game releases for the week of August 22nd, 2011

Deus Ex: Human Revolution (PC, Xbox 360, PS3) – You play Adam Jensen, an ex-SWAT specialist who’s been handpicked to oversee the defensive needs of one of America’s most experimental biotechnology firms. Your job is to safeguard company secrets, but when a black ops team breaks in and kills the very scientists you were hired to protect, everything you thought you knew about your job changes. Badly wounded during the attack, you have no choice but to become mechanically augmented and you soon find yourself chasing down leads all over the world, never knowing who you can trust. At a time when scientific advancements are turning athletes, soldiers and spies into super enhanced beings, someone is working very hard to ensure mankind’s evolution follows a particular path. You need to discover where that path lies. Because when all is said and done, the decisions you take, and the choices you make, will be the only things that can change it.

Call of Duty: Black Ops Rezurrection DLC (Xbox 360) – Lift off into the latest Zombies epic with “Rezurrection,” the new downloadable content pack for “Call of Duty: Black Ops,” and the first to launch players into space for a new dimension of undead action.  Old school Zombie strategies get blown out of the airlock in “Moon,” where armed with new perks and a space-age arsenal of weapons, our heroes must overcome undead astronauts and fluctuating gravity as they unearth conspiracies that began in 1943.  Rounding out Rezurrection are the 4 maps that spawned the Zombie phenomenon: “Nacht der Üntoten,” “Verrückt,” “Shi No Numa” and “Der Riese.”

Street Fighter III Third Strike: Online Edition (PS3) – Bringing the new generation of World Warriors to new consoles, Street Fighter® III: Third Strike Online Edition takes one of the deepest, most sophisticated fighting games of all time online with an arcade perfect re-creation. Featuring the unique and memorable characters of the Street Fighter® III series, GGPO-enabled online allows players to use their technical moves – like the series-defining parry system – in a seamless, arcade-like environment. High-quality, HD-filtered graphics emphasize the smooth animation, a vault of unlockables allow for replayability, and an integrated leaderboard combined with an extensive and viral YouTube™ Replay Sharing system encourage players to bring their A-game.

Shin Megami Tensei (DS) – Shin Megami Tensei: Devil Survivor marks the first time the popular RPG franchise has made its way onto Nintendo DS, and it certainly takes advantage of the opportunity. An incredibly innovative RPG/SRPG system—with tactical yet action-packed combat— compliments a powerful narrative in the great tradition of the SMT games. Fans will surely be thrilled with the stylish aesthetics, novel game mechanics, and original story, and newcomers will find a fresh new spin on the critically-acclaimed SMT universe.

Fighting Fantasy: Talisman of Doom (PSP) – Fighting Fantasy: Talisman of Death brings the original 16m selling series of Fantasy Role-Playing Gamebooks to the PlayStation Network for the first time! The once peaceful world or Orb is in terrible danger. Dark forces are at work to unleash the awesome might of the Evil One. Your mission is to destroy the Talisman of Death before the dark lord’s minions reach you. But beware! Time is running out… This PlayStation Network-exclusive version of Fighting Fantasy: Talisman of Death also features a Tarot Card character generation system, and the classic dice-rolling rule set you know and love, with optional all-new Battle and Test Your Luck systems for bold adventurers to explore. The intuitive Inventory system and an all-new Log Book help you easily track your progress through Orb’s magical world, make this the perfect way to relive this classic series.

Hamilton’s Great Adventure (PS3) – Take part in an amazing journey, guiding the splendiferous adventurer Ernest Hamilton and his brilliant bird Sasha as they co-operate to crack crafty conundrums and challenges! Progress through 60+ levels set in four unique and visually stunning environments. Enjoy co-op or single player gameplay featuring both action puzzling and traditional problem solving. Immerse yourself into the fantastical storyline filled with extravagant escapades and memorable characters. Join in on the fun as Hamilton’s Great Adventure delivers an exhilarating experience of exceptional family entertainment!