The latest news in the world of video games at Attack of the Fanboy
August 7th, 2011 by William Schwartz 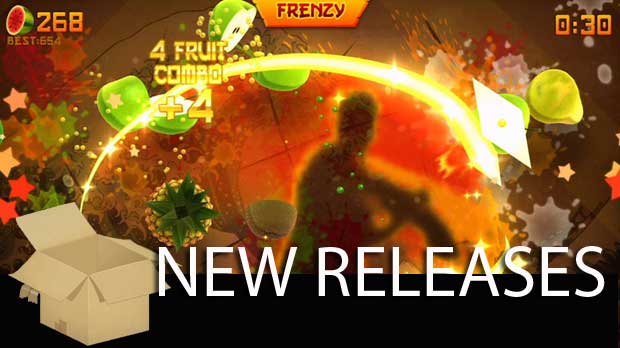 The lastest video game releases for the week of August 8th, 2011

Fruit Ninja Kinect – (Xbox 360) – YOU are the ninja! The worldwide gaming phenomenon Fruit Ninja has now arrived for Kinect! Your arms are now blades, and the epic battle against the world’s most delicious produce is just beginning. Fruit Ninja Kinect is an amazing evolution of the slice-em-up genre created by Halfbrick, utlising next-gen power for the juiciest combat ever! With Classic, Zen and the frenetic Arcade Mode, Fruit Ninja Kinect includes all the action you know and love with precision control – along with special features exclusive to Kinect! With Party Mode, multiple players can turn a normal night into a fierce tournament – and the new Challenge system will reveal the true masters among your friends!

Sniper: Ghost Warrior – (Xbox 360) – Sniper: Ghost Warrior is a first-person tactical shooter that places the player in the role of a US Marine sniper tasked with aiding in the liberation of a Latin American island nation from the oppression of a dictator. Gameplay focuses on realistic sniper missions, involving stealth, control of breathing and heartbeat for increased accuracy, bullet tragectory that takes weather conditions into accout and four different sniper rifles. Additional features include a variety of mission types, the ability to play as a member of an assault team, 12-shooter multiplayer support and close combat weapons and explosives.

New Star Soccer – (PC) – New Star Soccer 5 is a unique football game where you start out as a 16 year old boy and try to become a football legend. It combines an exciting 2D match engine with career mode that is superior to any other sports game out there (probably). You need to train, make transfers, do post-match interviews, stay in touch with friends, go to the casino, buy items, cars, property, a private jet… The list goes on! With so many distractions in a football star’s life is it any wonder that so many don’t make it? But what about you? Can you become a new star?

Puzzler World 2 (DS) – The best selling puzzler collection returns with even more fun in 2011! Boasting over 1200 different puzzles, with favories like Sudoku, crosswords and unique offerings like Link-A-Pix and Pieceword, puzzle fans are sure to find a wealth of fun in this unprecedented collection.

Spy Kids: All The Time in The World – (DS) – Step into the shoes of the newest Spy Kids, Rebecca and Cecil, as they race against the clock in this all out platforming adventure based on the upcoming theatrical release of the same name. The Timekeeper is threatening to take over the planet and it’s up to you to stop him from realizing his evil scheme. Utilize the coolest new hi-tech spy gear to take out swarms of enemies and solve puzzles that stand in your way. The clock is ticking, so gear up and reinvigorate the Spy Kids division for a new generation!