The latest news in the world of video games at Attack of the Fanboy
November 30th, 2017 by Jose Belmonte 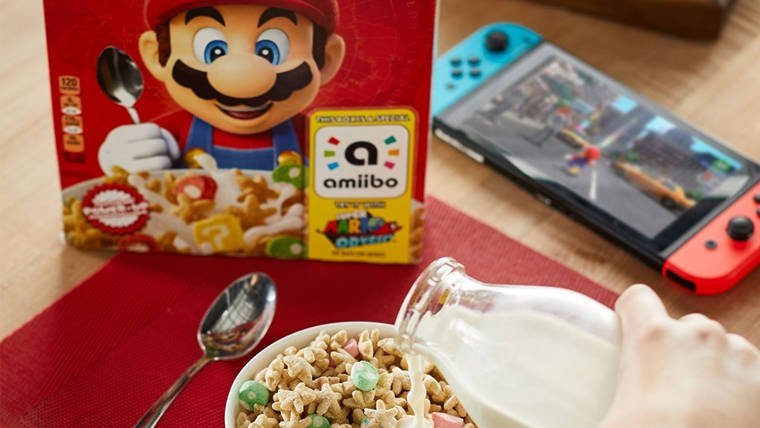 Breakfasts are about to get a lot more exciting for all Nintendo fans, as the company has unveiled the official Super Mario cereals, produced in partnership with Kellogg’s. The cereal will be a limited venture, linked to the promotion of Super Mario Odyssey, and will feature special collectible designs and amibbo functions, that will unlock coins and hearts on the Nintendo Switch game.

So, what does it taste to eat a Super Mario cereal? The official statement describes the ‘Super Mario twist’ of the morning meal as “colorful power-up marshmallows and a blast of mixed berry flavor in every box.” Indeed, there can be seen some marshmallows with the form of mushrooms and coin boxes among the star-shaped cereals in the pictures released.

Here is part of the statement released by Nintendo: With Super Mario™ Cereal, Nintendo and Kellogg’s® have teamed up to take fans on a breakfast odyssey that will continue long after the cereal box is empty. In addition to collectible Super Mario Odyssey™ box art, each Super Mario Cereal box functions as an amiibo™ accessory, making breakfast a more playful experience.

“This powered-up partnership with Kellogg’s is another exciting way for us to expand the Nintendo brand in unique and creative ways,” said Tom Prata, Nintendo of America’s Senior Vice President of Strategic Initiatives. “We are always looking for new opportunities to bring smiles to people of all ages, and this is a fun way to kick off the day.”

Super Mario Cereal is expected to be available in US stores from December 11.