Nvidia is releasing another set of 30-series graphics-cards, so good luck grabbing one of these. After months of credible rumors and speculation, Nvidia has revealed their new RTX 3080 Ti and RTX 3070 Ti GPUs. Both cards will go on sale this month (the 3080 Ti in a mere few days), though the threat of scalpers and miners remains ever-present. Thankfully, Nvidia has tuned both cards to make them less desirable to crypto miners (well, at least those mining Ethereum), but the prices certainly won’t deter enterprising scalpers. Time will tell if these are easier to grab than the other 30-series cards, but don’t hold your breath just yet.

Nvidia announced that both RTX cards will drop this month, with the 3080 Ti releasing June 3rd, and the 3070 Ti deploying June 10th. The 3080 Ti will retail for an MSRP of $1199, and the 3070 Ti will sell for a much cheaper $599. Realistically, both of these prospective prices will likely only apply for the first few days of sales, before scalpers and manufacturers drive up the price (just see the other RTX 30-series cards for reference).

That said, those still looking to upgrade may want to pass over the regular RTX 3070 in favor of the 3070 Ti if they can find it at MSRP (since the two are so damn close in price, theoretically). The 3080 Ti though . . . it’s a $500 price jump for not nearly as sharp an increase in performance. Nvidia is claiming it has over twice the performance of the 1080 Ti, which sounds compelling on paper, but not “$500 more than the regular 3080” compelling. 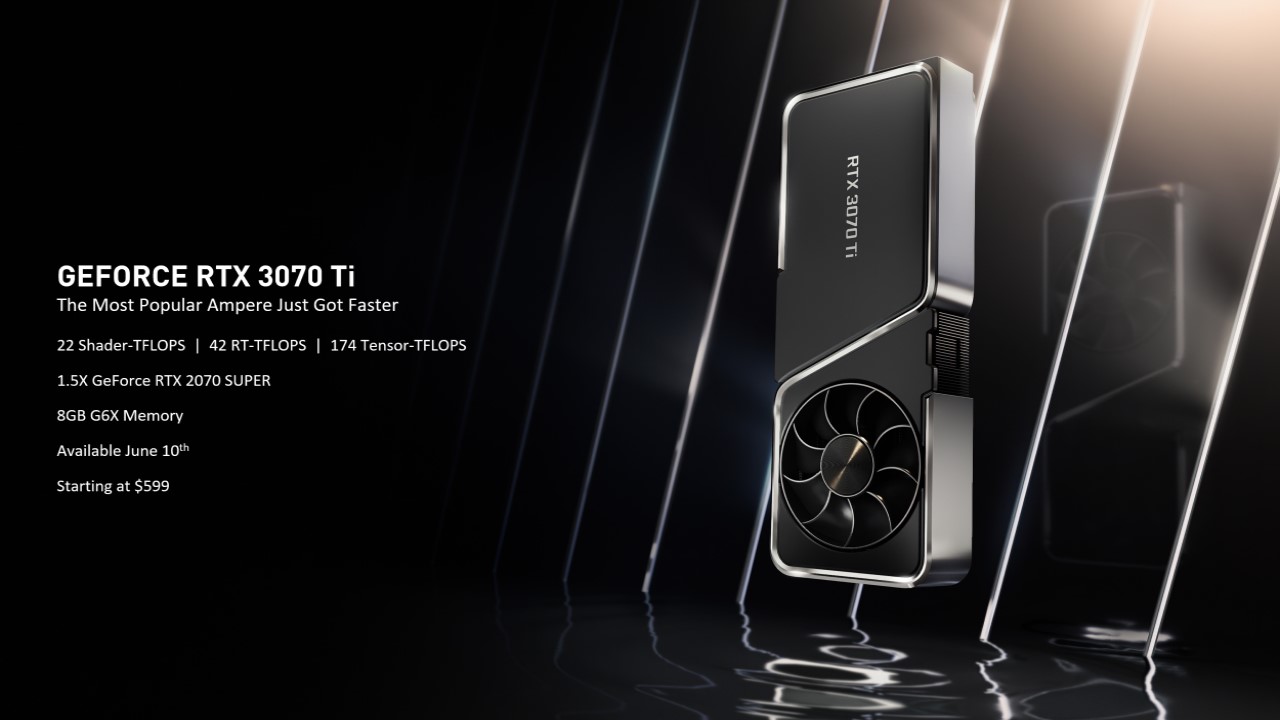 For the raw stats, the RTX 3080 Ti is rocking 34 Shader-TFLOPS, 67 RT-TFLOPS, 273 Tensor-FLOPS, and 12GB of G6X VRAM. The 3070 Ti sports 22 Shader-TFLOPS, 42 RT-TFLOPS, 174 Tensor-TFLOPS, and 8GB G6X VRAM. Aside from the beefier memory and moderate performance boosts, the two cards don’t appear poised to vastly outperform their predecessors. The 3070 Ti is at least priced competitively against the regular 3070 (if we look only at initial MSRP), but the 3080 Ti is a bit of a harder sell – it sits uncomfortably between the 3080 and 3090 in both price and prospective performance, so it’s hard to say who this card is really for.

On a more positive note, Nvidia has reduced the hash-rate on both cards to deter crypto miners from hoovering them up. In reality, this only affects Ethereum mining, since other cryptos are not impacted near as much by the limited hash-rate, but the crypto market is also taking a dive these days, which may be enough to keep miners away.