Orcs Must Die 2 is on the way 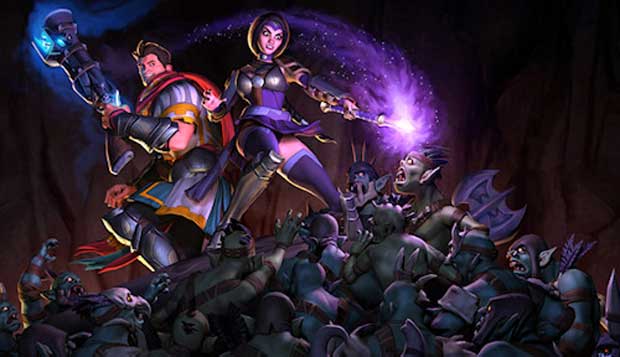 Robot Entertainment has announced that they’ll be releasing a sequel to Orcs Must Die, and will be available later this year.  Orcs Must Die! 2 begins days after the ending of the original game.  With the rifts closed and the magical Order dead, the War Mage finds himself suddenly thrust into a new battle against the mindless orc mob.  He has a powerful, if questionable, new companion in the Sorceress, an ex-War Mage responsible for the destruction of the Order.

New Campaign – Orcs Must Die! 2 features a full campaign that you can play in single-player or with a friend in co-op. Choose to play the campaign as the War Mage, a headstrong hero who charges into danger, or play as the more nuanced Sorceress, a new hero who keeps enemies at bay with mind-control and magic.

More Enemies – An army of vile new creatures is set to pour through the rifts, and they’ve brought all of your favorite trap-fodder from the original Orcs Must Die! along with them!

More Defenses – Orcs Must Die! 2 has an enormous armory of new and classic defenses, including an all new assortment of magical trinkets. Use your new spellbook to buy defenses and upgrades the way you choose to, building up your arsenal based on how you play the game.

New Upgrade System – The skull system has been completely redesigned. You will always earn skulls for replaying levels, and the skulls can be spent on multiple persistent upgrades for each of your defenses.
Players wishing to add to the current 3.4 billion dead orc count can download the original Orcs Must Die! on Steam and other PC Platforms. As a special bonus, players who own the original Orcs Must Die! on PC will unlock exclusive content in the sequel.

Orcs Must Die! 2 will be playable this weekend at Pax East.