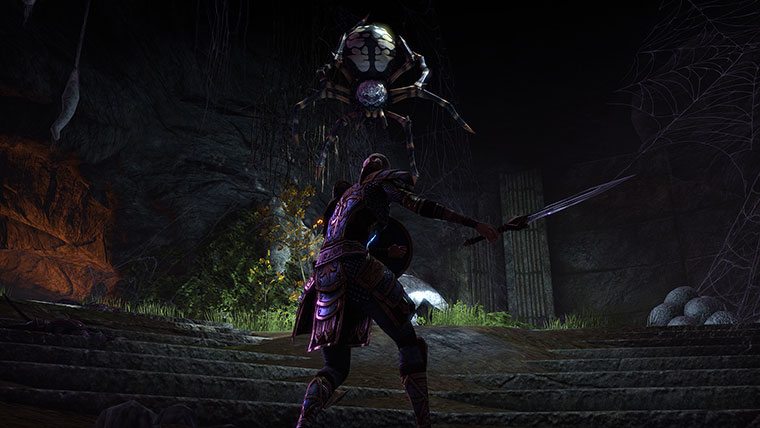 Another Elder Scrolls Online Beta weekend has come and gone. Over a million of keys were disseminated, friends were invited, and exclusive vanity pets were unlocked. The US mega server was veritably pulsing with activity, and teeming with excitement for the game’s imminent release early next month. Last time, we took a peek at PVP, customization and crafting. This time around, we’ll be putting first-person point of view under the knife, as well as questing and the general ambiance of the game.

The very first time I was invited to test ESO some months back, I decided first-person point of view was the way to go when playing any Elder Scrolls game. I’ve tried time and again to play games like Skyrim and Morrowind in third person, but it just never works out for me. Maybe it’s the clunky animations (much improved in Skyrim) or the necessity to hop everywhere like a court jester on the brink of a skooma overdose, but I simply do not stay in third person for very long for fear that I may just laugh out loud at a series I am so fond of.

And so it is strange that I found myself playing ESO almost exclusively in third person — and enjoyed it immensely. This past weekend, however, it was time to take first-person mode through its paces and finally see what it was made of. I played through all of my remaining quests and even did a little PVP exclusively in first person, and it was, well… a mixed bag. Your results may vary.

Remember Oblivion’s combat? The swing-something-until-the-enemy-falls-down strategy that plagued Morrowind and to a lesser degree, Oblivion is back — but the news isn’t all bad. You see, ESO mixes in a lot of fun little touches to help you forget the fact that the combat in first person feels like a slightly more mature version of Oblivion’s, with a little Skyrim seasoned in for good measure. If it wasn’t for the active nature of ESO’s combat, what you’d have left would be woefully last-gen feeling and uninspired. As is, however, ESO does a good job of feeling fresh and intense, even in first person mode. I could’ve done with a few more attack animations. My character specialized in the art of excavating skulls with a very large two-handed mace, and I couldn’t help but notice there were only a couple of different swing animations. In other words, for some players, this may be extremely boring for you. If you didn’t mind Morrowind’s paintbrush combat, this won’t be an issue, but ESO’s combat could do with a little more “weight” behind it where normal swings are concerned. The only saving grace here, I think, is the fact that you have many options available to you in the fray. Everything from shield blocking to parrying and dodging is an active skill to have in ESO. The game isn’t so much about hotkey rotations (a la World of Warcraft or Guild Wars 2) as it is about dodging or rolling out of the way of enemy special attacks, blocking or parrying and interrupting. It’s a great system that makes what would be otherwise simple and boring combat, some of the best I’ve experienced this side of Neverwinter. For example, I needed to end the life of a certain hair-covered man-like nocturnal creature, and I wasn’t prepared for its unique move sets. I attempted to block his regular attacks with my mace and wait for an opening so I could launch a few (hopefully) devastating strikes of my own. He ate right through me like he was a felling axe and I was the soft tender neck. I respawned and engaged him once again with a new strategy in mind. I blasted him with spells, keeping a good distance as I circled, and waited for him to “tell” his special power attack. Once successfully blocked, I was able to counter with a heavy power strike of my own, doing maximum damage. I rinsed and repeated a few times and the beast was down. My heart was beating a bit faster and it felt good, but the real excitement came from the fact that ESO fosters creativity and experimentation when approaching combat. If you’re a fan of reading enemy tells and reacting accordingly instead of lazily going through your F-keys with one hand and with your beer in the other, you’re going to have a great time with Elder Scrolls Online.

Is it as good and as weighty as, say, Skyrim or Dark Souls? Sadly, no, but it may get there in time. I will say this: first person view definitely makes the game feel authentically Elder Scrolls, and I was surprised by what a difference it made in terms of gameplay. At the risk of showing my age, I have fond memories of playing EverQuest in first person (the first MMO to include the pov) and the joy of being fully immersed in a game’s world as a result of that particular point of view. ESO is stronger for it. First person doesn’t feel like an unnecessary addition or an attempt at rote fan service, but instead a robust, magical facet to the game if you choose to play it that way. It’s a very cool feeling to teleport to a wayshrine (the game’s fast travel system) and see your character surrounded by a purple-glowing, swirling bubble of magical insulation as your hands carry through a sort of prayer as you complete the spell.

Other things like opening doors and chests aren’t as precise, but they never take away from the immersion that first person offers, in my opinion. 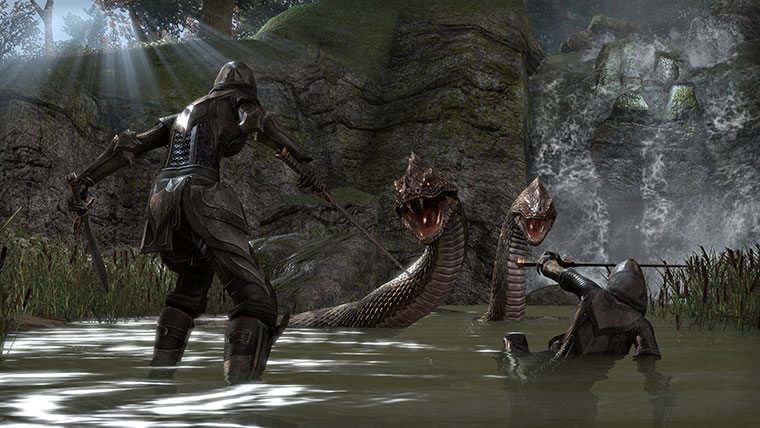 If there was a fetch, FedEx or grocery list kill quest in ESO, I didn’t notice, because quite frankly, the writing and dialogue is that good. Don’t mistake me, I wouldn’t put ESO, or any MMO, up against masterpieces like Pat Rothfuss’s The Name of the Wind or even Martin’s Song of Ice and Fire stuff, but as far as MMOs go, Elder Scrolls Online has some damn good writing. The questing and NPCs feel alive and the voice acting is generally top-shelf. I even noticed a couple of familiar voices that fans are sure to delight over once they hear them.

The quests are many and varied in ESO, with quest givers spread throughout each town and a few surprises on the road as well. I even came across a couple wandering merchants on my travels, which is a nice touch when you’re almost over encumbered and reluctant to go back to town. I once came across a strange Khajit who appeared to be digging next to a tree with his bare hands (paws?). I decided I needed to talk to this madman and see what he was up to. Turns out he was trying to run a grift on me, but I missed the correct dialogue option and he shut down for further dialogue. I’ll be seeing him again when the game releases and next time I’ll be using my powers of, shall we say, persuasion to get to the bottom of his story.

Another NPC who sold swords and bows, said something like: “Hello, are you in the market for a long sword or a short bow?” After a bit of a dramatic pause, he chuckles a bit and goes on, “It was a joke. What do you want?” I couldn’t help but smile. These kinds of touches indicate a labor of love, at least in my eyes. A game like ESO could easily be filled with the same old vendors spouting the same exact lines no matter where you were in the world, but it appears Zenimax has taken great pains to add variety in all facets of Elder Scrolls Online. Much appreciated.

And yet another NPC by the name of M’aiq the Liar told me lies. Fans will love this guy once again. Good luck finding him.

I digress. The questing is deep, fun and most of the stories involved are very interesting. The quest givers never feel like deposit boxes with golden punctuation marks over their heads or excuses for quests. Instead, they feel like part of the living, breathing world of Tamriel, as if they have lives of their own and you just happen to be in the market for assisting them in their troubles — not unlike other Elder Scrolls titles. 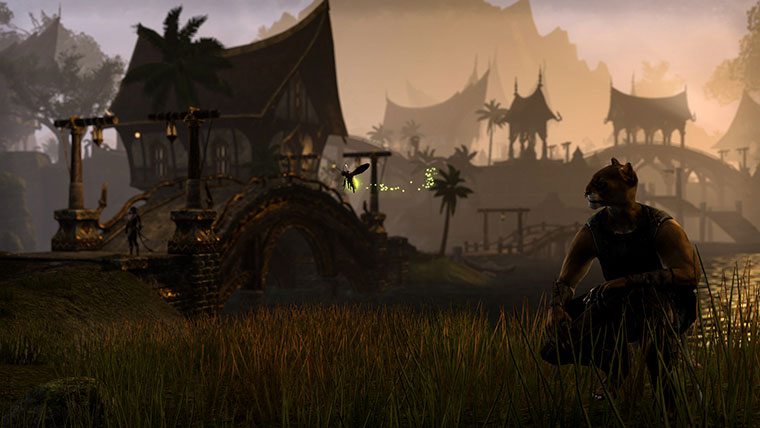 Skyrim had one of the best soundtracks in any RPG. It was a sweeping, rousing orchestral score that, to this day, has the ability to get my blood pumping. Elder Scrolls Online’s soundtrack follows suit to a lesser degree, outside of the incredibly intense login screen music. If you haven’t heard it, go find it on the internet. It could’ve been ripped right out of Skyrim. The rest of the soundtrack, however, takes a gentler, more melancholy approach. It ranges from tracks rife with serene violins and calming drops of piano keys to heart-wrenching tunes that will have you on the verge of tears. There’s also snippets and extended version of familiar songs from other ES games. I swore I kept hearing a new version of one of the most common songs throughout Morrowind. Each time I heard it, I smiled and expected it to go where I thought it was going, but it would take a turn and leave me wondering if it was indeed the same song. Simply put, play with a decent pair of headphones and prepare to enjoy some great music while you traipse around Tamriel’s wonderfully varied landscapes.

The sound effects are great too, and in the vein of the series. From grunts and groans to the huffing and puffing after draining your stamina bar, you’ll be right at home. The sounds of combat are the crown jewel, though. When you’re in the middle of a full-scale assault in Cyrodil, you’ll be engulfed in the chaos around you. Fireballs crashing and splashing a few inches from your feet and the heavy pounding of a battering ram sound authentic and violent and add to the already fantastic immersion factor that ESO offers.

One of my favorite touches came when I entered and random building (admittedly searching for any trace of The Dark Brotherhood or Thieves Guild) and found a makeshift tavern in the basement filled with npc patrons and a gorgeous Nord woman deftly wielding a lute. I /sat and prepared to enjoy. She sang two or three songs, one of which was quite possibly the saddest, most heart-wrenching song I’ve ever heard. I immediately whispered a couple friends I was playing with and told them to get their asses to my location and share the experience. It was quite impressive and I think it was the moment where I truly fell in love with the game wholeheartedly. It was the moment where ESO transcended its MMO trappings and coalesced into a true Elder Scrolls experience. I look forward to many more of these moments in April.

In the words of some other guy in the gaming industry: my body is ready.