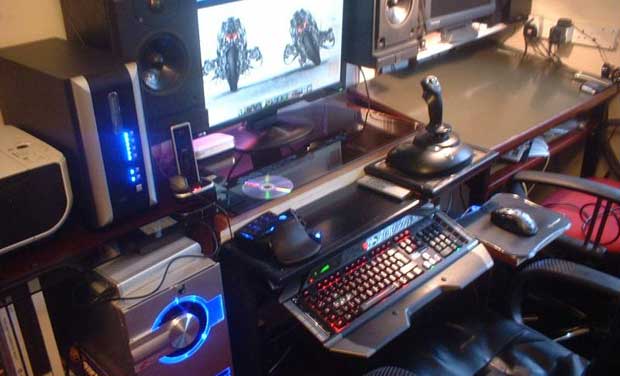 The battle between PC and console gamers has been a long lasting one. There are many good reasons to swear allegiance to either side of the field, but there has to be a clear winner, right?  We’ll look at the positives and negatives of these two gaming mediums, and give our verdict on the matter.  First up, PC Gaming.

Hardware Options
One thing the PC really has going for it is its ability to use multiple peripherals for interfacing with the games you play. The classic mouse and keyboard combo, your Xbox 360 controller, your PS3 controller, and with a little bit of work your Kinect or Wii. These options allow you to play any game with a proper control scheme. You also can’t argue with a PC gamer when it comes to the accuracy of a mouse.

PC Greatest Hits
These “greatest hits”, are the games that work the best on the PC. These include, at the core, real time strategy and massively multiplayer online games. I for one am a huge fan of RTSs. Since the original Stronghold Crusader to Dawn of War: Dark Crusade, I have been loving every moment of the chocolate and peanut butter-like combination that is base building and war raging.

I have been less of a fan of MMOs but I can’t say much against the incomparability that World of Warcraft has made for itself, and even those many clones such as Warhammer Online: Age of Reckoning and the upcoming Star Wars: The Old Republic, MMOs are a strong force to be reckoned with.

FREE Stuff
Online flash games are plentiful to say the least. There are literally thousands upon thousands of these games hitting every genre imaginable. Some of the most creative games you can find lay on the wild world web. Retro games have also been reborn on the web such as the classic Zork. A quick search on Google will you find you games of all sorts for not even a penny.

Costly Upgrades
Although PC graphics can be absolutely striking, these visuals are often powered by very expensive equipment. The original Crysis birthed many rumours and stories in the gaming community about people going to drastic measures to purchase PC upgrades to play the juice sucking title. As important as eye candy is, it shouldn’t cost you a kidney or family member in order to achieve.

Ignorance Sucks
Looking at the facts, PC gamers have few games to boast about. Most developers are focusing their attentions on the console market, as it holds a huge chunk of said market. Few games are exclusive to the PC except those in which are best on PC (see above) but misses out on all of those great console exclusives.

Exclusives
The consoles have the best exclusives games available. From the PS3’s AAAs like Uncharted, Resistance, Ratchet and Clank, or Twisted Metal, to the 360’s big titles like Gears of War, Halo, or Forza, the consoles are where the big are at.

Local Multiplayer
The rarity that is local multiplayer is really only available on the consoles. Borderlands, Call of Duty Modern Warfare (and Modern Warfare 2, World at War, and Black Ops), most EA sports games, Rainbow Six: Vegas 2, etcetera, etcetera. Local multiplayer allows you to rub your opponent’s nose in their loss with no ping and lots of danger.

Sleek Operating System
No matter if you game on a Windows or Mac machine, you’ll have to go through an operating system that isn’t meant for gaming at its core. A console’s beefed hardware and slim OS allows it to boot quicker and get you to the games quicker.

Loose Controls
Until recently, FPSs have been lackluster on the consoles in comparison to the PC. Even now, with the likes of Call of Duty and Battlefield, the PC still has a better setup than the consoles for shooters. For other genres, such as RTSs and MMOs, there is an almost impossibly high wall developers would have to climb to make a proper iteration for either genre. There have been attempts but few have nudged any PC gamers away from their versions for any amount of time.

Dealing with Other Gamers
Let’s face it, some gamers are scary and association with these people scares us even more. With a console, if you have even played a game with another player, they can probably find your ID and message you with text, audio, image, or God forbid, video. Privacy is something on many people’s mind, especially on the internet, and the consoles aren’t very private platforms. If someone is “harshing your mellow” on the PC, just get off the game and never hear from them again.

For me, the consoles edge out the PC slightly being more cost efficient and having a better selection of games. Still the PC is a force to be reckoned with, and could come back on top.

Are you on the console side? Or in the PC regiment? Let us know below.