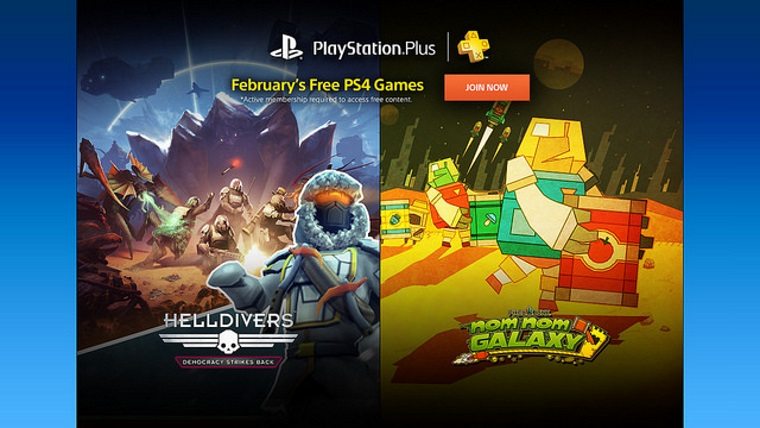 Sony has revealed the free games that PlayStation Plus subscribers will be receiving for the month of February 2016. The list includes a few big name titles, though nothing on the level of past AAA releases. However, some of the games included are highly requested, and very well-received by fans and critics alike.

The games available for free to PS Plus members in February 2016 are: Grid Autosport for PS3, Helldivers: Democracy Strikes Back for PS4, PS3, and PS Vita, Lemmings Touch for PS Vita, Nom Nom Galaxy for PS4, Nova-111 for PS Vita, and Persona 4 Arena Ultimax for PS3. In total there are two PS4 games, three PS3 games, and three PS Vita games using cross-buy.

The two PS4 games were described by Sony, saying “Set in a satirical and dystopian future, Helldivers offers chaotic combat against three invading enemy species. This top-down shooter focuses heavily on teamwork, as squads battle to become Heroes of the Federation. So grab your friends and take on the invaders — just be sure to watch out for friendly fire!”

“In Nom Nom Galaxy, you’ll enjoy a variety of gameplay; platforming, mining, base construction, resource management, tower defense, and of course, making soup. As a new Astroworker for SoupCo, you’ll be producing different soups to keep the aliens fulfilled and fighting greedy competitors. Protect your factory and become the most powerful soup company in the galaxy.”

Helldivers playstation PlayStation Plus PS Plus
We're Looking For Contributors