Magikarp Gets Its Own Pokemon Spinoff, Out Now for Mobile

The latest news in the world of video games at Attack of the Fanboy
May 25th, 2017 by Jose Belmonte 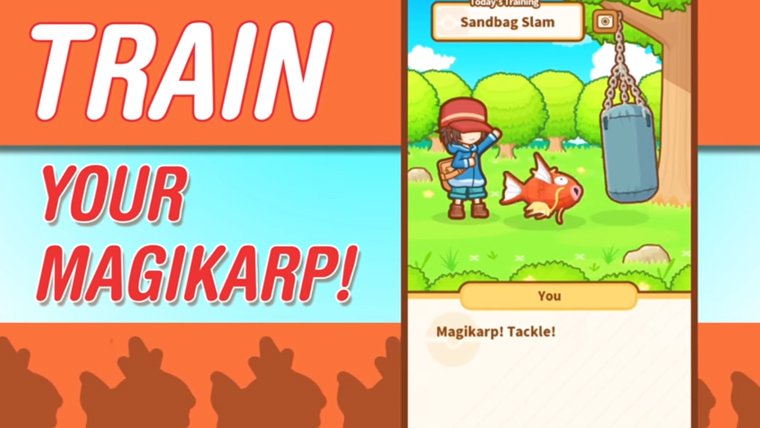 The Pokemon Company has surprised everyone with the launch today of a new game for iOS and Android devices. Titled Pokemon: Magikarp Jump, the game puts players to take care and train Magikarps, the iconic fish Pokemon, with the objective of becoming the highest jumper of the world. Featuring simple but addictive gameplay and the usual charming designs, Magikarp Jump sounds like the perfect casual game for the summer, and the best of all is that you can download it for free.

The official description of the game is full of the irreverent humor that usually surrounds this type of Pokemon. Magikarp is described as a creature famous for being pathetically weak, unreliable, generally useless, and pretty much the weakest Pokemon ever. And despite all of that, Magikarp has earned the love and devotion of the fanbase, which makes it the perfect candidate to get its own videogame spin off. Magikarp was also the subject of a song posted by the Pokemon Company.

Pokemon: Magikarp Jump features easy controls to be accessible for players of all ages and gamer levels. Gameplay basically consists on tap the food that appears on the screen to give it to your Magikarp, and then complete the jump training to increase its level. After going through several challenges, the Magikarp will retire at level 20, but players will be left with a descendant that will be stronger than the previous generation.

Players can fish a wide variety of Magikarps, including some featuring patterns on their skin like calico and polka dots, which they will be able to show off to their friends on social media.

Additionally, the gameplay allows players to decorate their pong with a selection of elements, with some even helping the Pokemon to grow faster. There will even be some other Pokemons like Pikachu or Piplup that will make a special appearance from time to time, and will give Magikarp some advantages.

Pokemon: Magikarp Jump is out now on iOS and Android. While the app is free to download, it includes in-app purchases.

Jump into Action with Magikarp Jump!

Home / Game News / Magikarp Gets Its Own Pokemon Spinoff, Out Now for Mobile