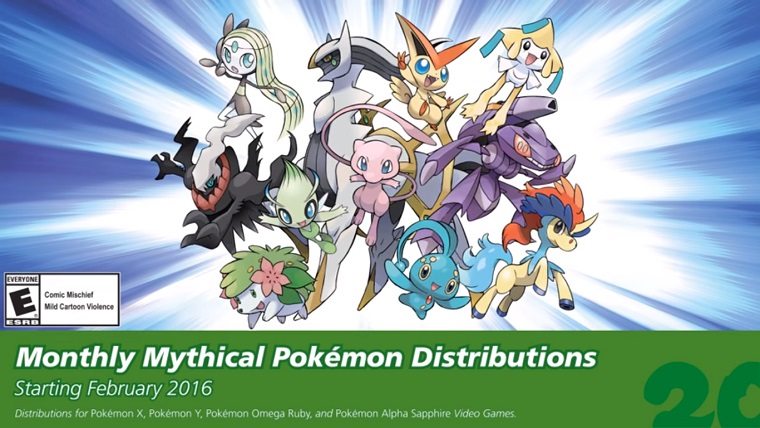 2016 is going to be a big year for the Pokemon franchise, as it celebrates its 20th anniversary in major fashion. We are finally getting at least one new game in Pokken Tournament, along with the re-release of the first games on the Virtual Console. That is far from all, as we are also getting special monthly distributions that were teased yesterday in their 20th anniversary video, but now all the details have been revealed.

Special event Pokemon distributions have been a part of the Pokemon franchise since the early days, as that was the only way to get Mew back in the day. They have gotten a little easier over the years through Wi-Fi, whether in-store or over the internet.

The latest round of distributions will take place starting next month and running through the entire year with 11 different Pokemon to get in that time, split between distributions at GameStop and through the Nintendo Network.

You will be able to get of each of these in the recent games with Pokemon X, Pokemon Y, Pokemon Omega Ruby, and Pokemon Alpha Sapphire, with each of these legendaries being Level 100. The full list and distribution dates are as follows:

As you can see, all of the distributions only run through the 1st and the 24th of each month for some reason, so make sure to do them within that time period each month.