The latest news in the world of video games at Attack of the Fanboy
August 22nd, 2014 by Kyle Hanson 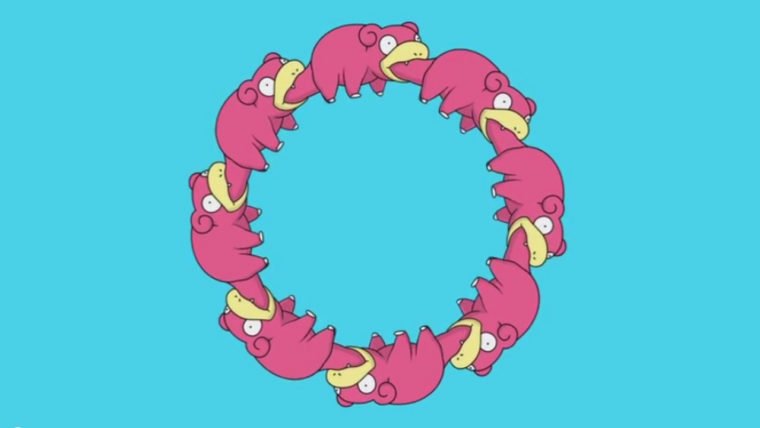 Pokemon’s Japanese Youtube page uploaded this new music video yesterday. It features Slowpoke, whose Mega Evolution was announced to feature in Pokemon Omega Ruby & Alpha Sapphire. According to Google’s translation the song is called Yadon Ninen Ya no etc.  and that is only the first thing about this video that doesn’t make any sense.

The video is pretty amazing, showing tons of Slowpokes in some sort of Slowpoke-centipede. Others are rolling around just hanging out as Reggae music plays. It is surreal, it is weird, and it is awesome. The fact that this was released in an official capacity just makes it that much better.

Reddit user tomdi21 did a “very rough” translation of the lyrics from Japanese to English. It clears up a lot of the questions surrounding the video except for how exactly this came together. The song seems to be all about how lazy Slowpoke is, with lines like “you sleep until midday with a dream that started when the sun rose” and “you move so slow photos don’t blur, is that what you’re proud of?” Again…amazing.

Check out the video above, and try to follow along below with the full traslation provided by tomdi21. Note that “Yadon” is the Japanese name for Slowpoke:

How’s it going slowpoke?
You sleep until midday with a dream that started when the sun rose…yadon
Isn’t your pink tail a little over-boiled? I wonder what it was like before…yadon
Your huge mouth is always open like a combini [Japanese convenience store]…yadon
Your sweet tail is sometimes a snack for kids…yadon
You move so slow photos don’t blur, is that what you’re proud of?…yadooon

If your tail comes off it grows back so don’t worry…yadon
The name given to you was “idiot” Pokemon…yadon
A three syllable word starting with “Ya” and ending with “n” is…yakan! (kettle)
You fish with your tail but don’t notice if you get a bite, or if it gets away…yadon
I don’t recommend “yadon” if you’re playing “oshiritori” [Japanese word game]..yadon

With one yawn you cover people in rain, like some kind of fabled rain dance…yadon
But for a while now there’s not even a cloud, so what happened to that fable?…yadon
If a Shelder bites your tail you become a Slowbrow – even your evolution is stupid…yadon
Where ever you go in the world there’s slowpoke, even behind you!..yadon
Yamakake, Tsukimi, Tempura, Gomoku, Karee Nanban… Udon! [Names of foods]

A big nut fell on your head but it didn’t hurt…yadon
Why are your ears twisted round in a coil?…yadon
When you suddenly say “Yaan” is it because that nut from before hurts now?…yadon
Sometimes you’re slowbro, sometimes slowking or just as you are…yadon
You look happy all together in a circle with your tails in your mouths…yadon