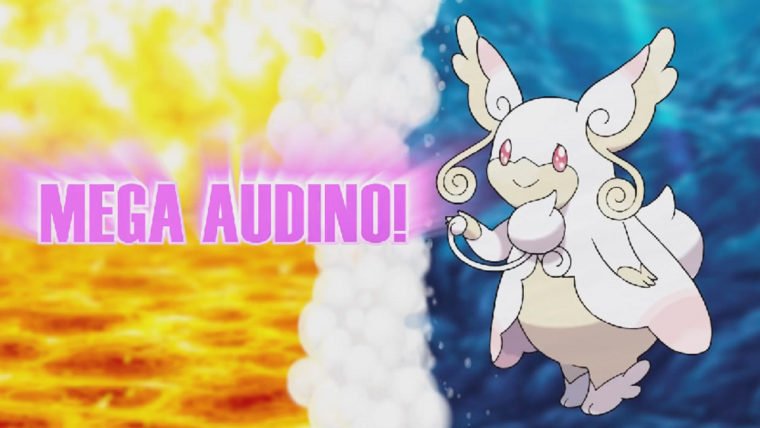 As we reported earlier a leak revealed the existence of two new Mega Evolved Pokemon in Pokemon Omega Ruby and Pokemon Alpha Sapphire, Mega Slowbro and Mega Audino. While we don’t have any new information about Mega Slowbro, Mega Audino has been confirmed by Nintendo in a new video. Not only do you get a better look at the new Mega Evolution, you get to see actual gameplay.

Mega Audino will be a Normal/Fairy making it perfect for taking out those Mega Evolved Dragons like Garchomp and Salamance. In Audino’s Mega Evolved form she will have boosted Defense and Special Defense stats as well as the Healer ability.

Mega Audino is the ninth new Mega Evolution revealed for Pokemon Omega Ruby and Alpha Sapphire. Mega Slowbro will be the tenth whenever he is fully confirmed. This combines with the 30 Mega Evolutions that were introduced in Pokemon X and Pokemon Y to make 40 total possible Mega Evolutions among the 719 total Pokemon, not accounting for lower levels of evolution of course.

Hopefully Nintendo confirming this reveal means that Mega Slowbro will come soon. His design and story seemed to be a hit with most fans, resulting in some hilarious internet gifs and images. Audino seemed to be a less popular choice, with many fans expressing concern that this should have simply been introduced as a regular level of evolution, reserving Mega Evolutions for more important changes and stat boosts. Most of the previous Mega Evolutions have been fairly popular choices, such as Mega Metagross, which you will be able to get a super-rare shiny version of if you buy the game early.

We’ll just have to wait for more revelations from Nintendo to see how well they’ve judged the community’s wants in regards to which Pokemon get Mega Evolutions and which ones are skipped. Pokemon Omega Ruby and Pokemon Alpha Sapphire will be available on November 21st exclusively for Nintendo 3DS and 2DS.