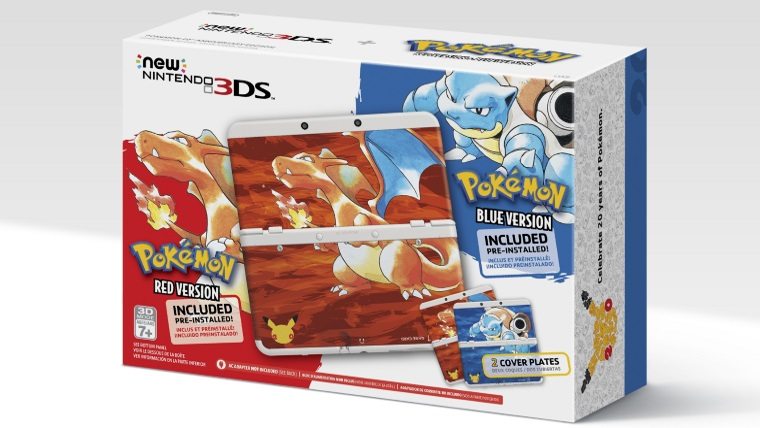 Nintendo and The Pokemon Company have announced a new limited edition New 3DS bundle that is themed after the classic Pokemon Red and Blue Game Boy titles. The news comes as the series heads toward its 20th anniversary, with many speculating on how Nintendo plans to celebrate the venerable series’ milestone. This seems to be one of the first big steps, with more hopefully coming later on.

The bundle comes with a New Nintendo 3DS handheld system along with cover plates themed after Pokemon Red and Blue. Charizard and Blastoise are featured on the cover plates, just as they were on the original game box. The bundle is for a regular sized New 3DS, rather than an XL, hence the cover plate rather than the usual paint. There is currently no word on these cover plates being released outside of this bundle.

Along with the system comes a copy of both Pokemon Red and Blue, which will be preinstalled on the system. Owners will also get a downloadable code for a special Pokemon inspired theme which can be used on the system’s dashboard.

The Pokemon Red and Blue New 3DS bundle will hit some time in February in the US according to Nintendo Inquirer. Pricing should be normal, so keep checking for a more specific release date if you are looking to grab the system.

UPDATE: In addition to the bundle, The Pokemon Company has announced that some of the more popular Pokemon Amiibo will get a restock, specifically Charizard, Jigglypuff, Greninja and Lucario. Also, there will be monthly legendary Pokemon distribution events hosted at Gamestop. To learn more, check out the video below.