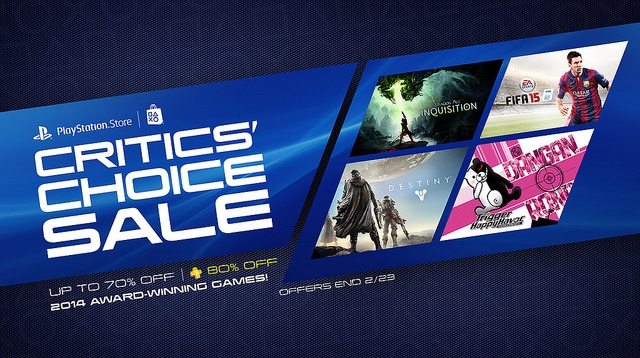 Xbox fans aren’t the only ones who will be enjoying sales this week. PlayStation has announced a ‘Critic’s Choice’ sale that will run on all platforms and feature a wide variety of major releases for low prices.

The PlayStation Blog announced alongside the PSN update today that the Critic’s Choice sale is going to be running up through Monday, February 23rd. The sale, which can be found here, offers a great array of titles from FIFA, Destiny, Call Of Duty: Advanced Warfare, to titles like Dragon Age: Inquisition and Far Cry 4. Discounts will run as much as 70% off and if you have PS+ it can take you as far as 80% off certain titles. Talk about savings. Below are just a few of the many savings players can look out for along with their PS+ counterparts.

Be sure to check out the full list of titles as well as a sale that they are doing on Oscar award winning movies on the PlayStation Blog.