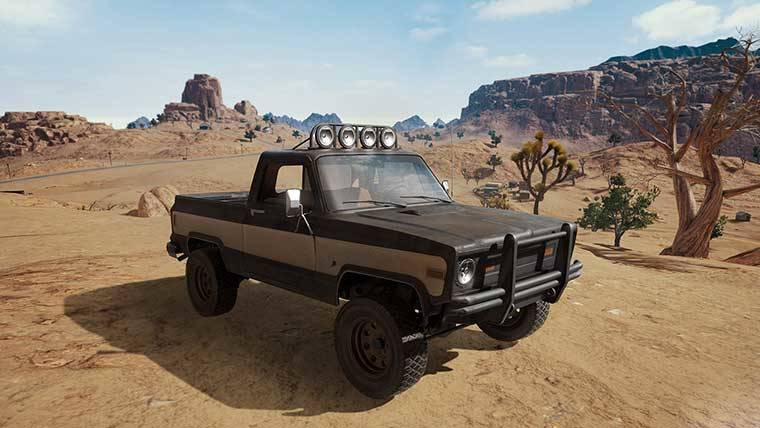 When the new desert map releases for PUBG, players are going to have some new options when it comes to transportation.  Revealed today, this off-road truck appears to fit a full a squad with seating in the front of the truck and in the bed.

The image also gives another glimpse at the Desert Map for PlayerUnknown’s Battlegrounds that is set for reveal at the Video Game Awards later this month.  PUBG players are already getting excited about the possibilities that this new vehicle could hold.  Never with a lack for creativity, some players are thinking ahead, planning on trying to use the crate to secure one of the crates that come by airdrop for a quick getaway.

One thing’s for sure, this better not be a two-seater.  This truck looks like it was meant to carry a full squad and hopefully the developers have made use of the bed of the vehicle so that players can shoot or be shot, giving a risk and reward for using the truck.

We’ll likely see much more of the vehicle here in the very near future.  PUBG testing is ongoing, and the next round of tests are said to open up the Desert Map, as well as allow players to test out a new weapon that’s also exclusive to the new Desert Map.

PlayerUnknown’s Battlegrounds is currently available via Steam Early Access, but it’s one week away from making its console debut on the Xbox One.  Just how close the console version is to the PC version in terms of completeness is anyone’s guess.  The developers did state that the game would be locked at 30FPS across all Xbox platforms, regardless if you have the more powerful Xbox One X, or not.