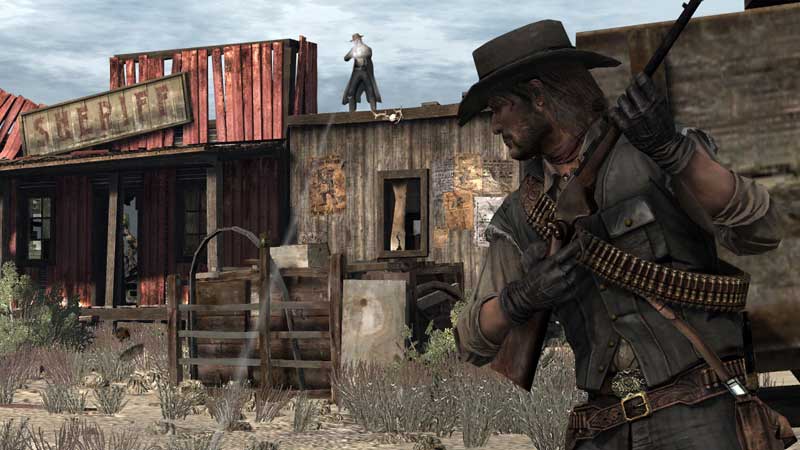 Rockstar Games is shining the spotlight on fan-created content in GTA V, more specifically, on content that is inspired by Red Dead Redemption in player-created jobs. This Red Dead Redemption GTA V mash-up content can be added to your favorites and played the next time you hop on GTA V.

A number of user created content has been highlighted by Rockstar, descriptions of which you can find below.

As long as you’re willing to overlook the occasional shipping container (think of them as abandoned railway cars), you could easily slip back in time and be convinced you’ve been transported to the Old West in this Deathmatch set around the dusty confines of the Chiliad Mountain State Wilderness. There’s a back-to-basics feel to the restrained placement of Pistols, Sawn-Offs and Molotovs here and the varied elevation of the setting, paired with the generous cover, make for a well-balanced and tactical Deathmatch. Plus the opening standoff, with each team starting out facing each other, nicely approximates Red Dead’s last-man-standing style Duels.

With the haze of New Austin far off in the distance, this rural retreat that’s reminiscent of Beecher’s Hope is a great setting for a well-pitched Deathmatch. Pistols are the order of the day but, if you look hard enough, you may very well find a Sawn-Off or a Grenade to mix things up. Unless the Wright Brothers took an undocumented trip cross country, we’re not sure if the Duster is completely on-theme… but we’ll let that slide.

“Do you long for the days when Deadeye was king and the only thing between you and death was the speed of your draw with a Double-Action Revolver?” reads the description for this GTA Online take on Red Dead multiplayer mode “Hold Your Own”, which has racked up over 600 plays at the time of this writing. JaseTheChase has used shipping containers and other Props to create a faithful replica of Tesoru Azul, one of the hideout locations in Nuevo Paraiso. The aim here is simple: grab the opposing team’s bag and take it back to your base. Weapons are locked to Pistols but you can also find some Molotovs scattered around for fiery fun.

These steeds might not eat straw but this Sanchez Point-to-Point Race across the Grand Senora Desert, compliments of a long time member of the GTAGaming gang (and a Commissioner in the GTAGaming Crew), takes us back to playing Red Dead’s Grand Prix. It’s all here – weaving through cacti, cutting through brush and speeding along the rail track – albeit with a different kind of horsepower involved.

This Team Deathmatch takes place at the old sawmill and surrounding valleys located at the foot of Mount Chiliad and Mount Gordo. It features a good range of cover and elevation for a back-to-basics, Pistols-only shootout. Just beware of taking cover close to the gas tank at the back of the house. There’s something a bit more combustible than manure inside…

Another Deathmatch commencing with a close proximity Red Dead-style duel, but this time starting ammo is restricted so you really need to make every shot in the chamber count. From there it all goes down in an enclosed space surrounded by train carriages and removed from the modern trappings of civilization. Rocks are your cover and bushes your hiding spots, with a raised area in the center providing some great coming together moments.

The mountainous and wooded Tall Trees area of West Elizabeth is a popular hunting ground in Red Dead and this GTA Online Job, set in Raton Canyon, substitutes Pistols and Shotgun skirmishes for skinning bearhides. Expect many tense shootouts as players make the most of the ample cover provided by the forest.

Grab the Bag is one of Red Dead’s best-loved multiplayer modes and this GTA Online version by BigSo786 is a fitting tribute. The central bags, protected at the beginning by potent Actors, and the small playing area make for an intense start as all four teams converge. Once things spread out, varied elevation and a good spread of weapon pickups offer scope to mix up your tactical approach.