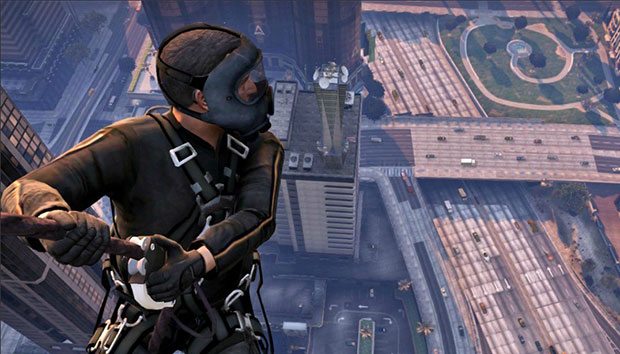 Rockstar Games has finally taken the wraps off of GTA V, and as expected, it’s going to be one of the biggest games of 2013.  It looks like Rockstar is going big for GTA V.  Not just in size and scope of Los Santos, but in the ways that will change up the traditional Grand Theft Auto formula.  For this massive game, a massive preview from Game Informer magazine recently went live.  In it, a ton of new details about the open world game can be found, summarized below.

There had been a lot of speculation about the main characters of Grand Theft Auto 5.  How many would there be?  What would their back-story be?  Today these rumors have finally be put to rest, in exchange for absolute certainty from the developer that three protagonists would be featured in GTA V.  The big change that GTA fans will see is that these three protagonists can be switched between at any time.  Multiple characters in a less traditional sense, players won’t be playing blocks of missions as one character then switching storylines as so many other games do.  Instead, players will be constantly switching between the main characters, giving a perspective switch at the press of a button.  These three characters will be able to interact in their day-to-day activities in different ways, and will continue to go about their daily business if a player switches to another.  The three characters are Michael, Trevor, and Franklin. 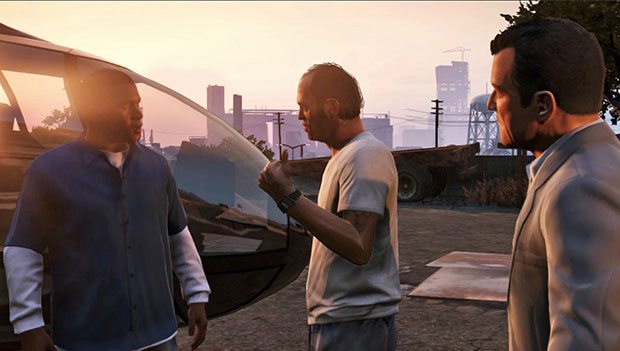 Michael is the retired gangster.  The one from the early trailer that has gotten sucked back into the criminal lifestyle.  He’s a man that is struggling with becoming domesticated  discontent with his wife and has trouble communicating with his children.  Residing in Los Santos’ equivalent to Beverly Hills, it doesn’t seem that Michael needs to get back into the criminal lifestyle for monetary gain, but then again, his wife could be shopping him out of his comfortable home.   Trevor is Michael’s life long friend.  He’s a war veteran who lives in the desert among bikers and meth addicts.   He appears to be the wild card of the bunch, with a maniacal personality.  Franklin is a repo man, and the youngest of the trio.  In his mid-20’s, this character’s ambition matches his youth and meets Michael in his search for his next hustle.

Mission structure will pair off different characters together, and at times will feature all three characters.  The first gameplay from GTA V showcased a mission with all three characters in a robbery mission where the player can accomplish their objective from both fixed perspective action with one character, or given the ability to switch to one of the others.

When not on missions, each character will have his own life to interact with, and friends to relate to.  Michael will interact with his wife and lazy pot-smoking buddy.  Franklin’s friend Lamar will provide some traditional Rockstar comic relief. Trevor will interact with a conspiracy theorist named Ron, which will match up with his personality.  The three characters will each have their distinct traits, but one common thread between the three is money.   The partnership will engage in multiple bank heists, and this appears to be a major theme in the game.  According to Rockstar’s Dan Houser in the GTA V preview.

“People are in love with doing the bank jobs, particularly when they feel like they have prepped the bank jobs,” said Houser.  “We’ve never felt we’ve done a great job with a bank job, so we decided ‘Lets properly invest the story and the mission design for some of the missions into making some these built out series of heists.” 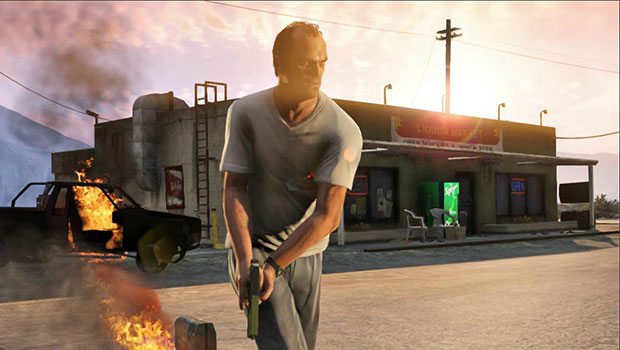 Rockstar announced a long time ago that they would be returning to Los Santos, a fictional version of Los Angeles, CA and its surrounding areas.  What we didn’t know is why.  The developers addressed that they felt that they needed to do a “proper” Los Angeles, which they feel they didn’t quite hit with Grand Theft Auto: San Andreas.  Since the release of San Andreas, we’ve seen Rockstar do Los Angeles in some pretty spectacular games.  L.A. Noire being a faithful recreation of the city albeit in an earlier time.  Rockstar says that Los Santos is about the size of Grand Theft Auto IV and Red Dead Redemption, combined.   It will differ from GTA: San Andreas though, and not only in the more accurate depiction.

Rockstar plans to cover all the bases this time around, bringing the city to life with its real-life traits and hot button issues.  Rockstar has always addressed topical content in the Grand Theft Auto series, and GTA V will be no different.  It will visit Hollywood, the medical marijuana industry, pornography, the homeless problems, and the multitude of economic problems that California currently has.   Being the largest open world that Rockstar has ever created, GTA V will feature a mixture of diverse locations that range from Beachfront to mountainous wilderness with urban in between.

The developers have already revealed many of the games side activities, but have been reiterated in the recent reveal.  Side activities like poker from Red Dead Redemption will also be seen in GTA V, as well as character specific activities/hobbies that only specific characters can complete.  Rockstar says that the new mini-games and activities in GTA V are more sophisticated than in GTA IV, and there are a lengthy list of things to do outside of just completing storyline missions.   This won’t be a big stretch for the franchise, but many fan favorite activities will be returning.

A big theme for Rockstar in this first preview was building a better mousetrap with Grand Theft Auto 5.  This will also apply to the gameplay elements in the game.  The developers described driving cars in GTA IV as “big and boatlike”, but in GTA V they describe the game as having more of a racing game feeling.   Without going into too many details, they’ve also suggested that the shooting mechanics for the game have been overhauled as well, and built from the ground-up for GTA V.  This goes the same for the melee moves found in the game, claiming to have “evolved nearly every mechanic, and introducing new technology”.

Not many details were given as to how these mechanics would change, so its unclear if Rockstar is still ironing things out on this front, or if they are looking to leave some things sacred until the Spring release.

There are plenty of details in the most recent issue of Game Informer magazine, and likely many more to come in the weeks to follow, as well as a new gameplay trailer from Rockstar due on the 14th of November.