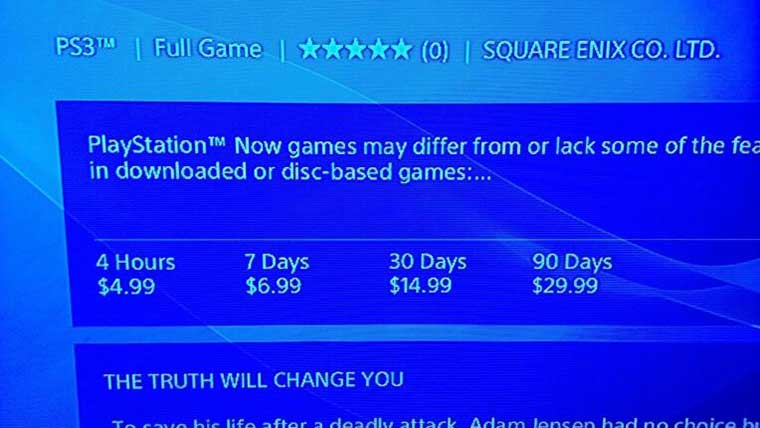 Playstation Now is highly anticipated and one of Playstation 4’s most wanted features for gamers to play older generation Playstation titles. However it seems that a leaked pricing model might be the downfall of the service.

This is all based on some random image that we gathered from Twitter via the user PSN_Updates so take this all with a grain of salt until Sony officially responds. The Playstation Now pricing listed above is quite insane as the 29 day rental fee is just about how much you can pick up the game at full price, not counting discounted rates. I mean four hours for $4.99 that is insane. A two hour movie on PSN to rent is $2.99-$3.99 depending. That is some serious price gouging on Sony’s part if this is true.

Again, this all has to be taken with a grain of salt as this can be just another photoshopped image or just something that Sony and Playstation were testing the waters with that will never see the light of day. Anyone who is in the Playstation Now beta they can attest to the fact that Sony says that they are working to get a good price point. However, this definitely isn’t one that price point.

What do you think? Is this price point fair? Do you think this rumor is insane? Let us know in the comments.

UPDATE: This price list looks to be 100% Legit as reports have come from people whom are within the beta that these numbers are in fact shown in the beta. It will be interesting to see where this goes from here if Sony lowers the price due to public outcry.