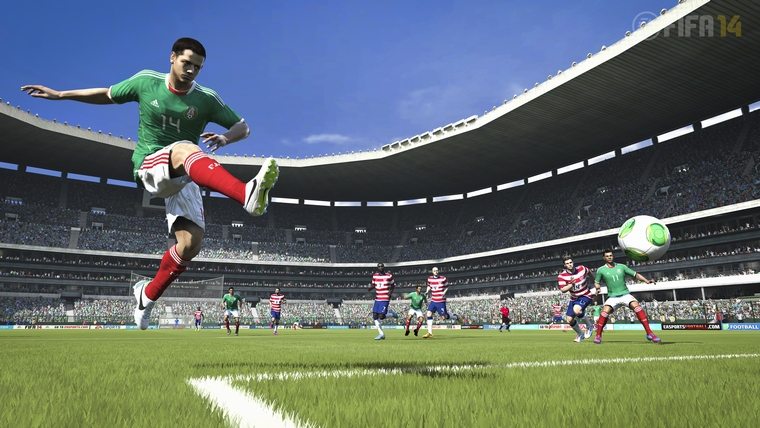 FIFA 14 is out now in North America and will release Friday 27th September in Europe. For those of you that have played it, you’ll know that it’s harder to score than in previous FIFAs. Well, this is here to give you some tips and hopefully get you scoring freely again.

Both the Finesse shot and the Chip shot are more powerful in the FIFA 14 that they were in FIFA 13, and you need to take advantage of this. To do a Finesse shot, you need to hold down RB or R1 while pressing shoot. These are very effective in one-on-one situations with the goalkeeper, or when a defender in blocking part of the goal. Always try to shift the ball on your player’s stronger foot before shooting, and try to align your player diagonally away from where you’re shooting. Normally you’d try to aim at the far post, but don’t be afraid to try and slip the ball in at the near post along the ground, as this has worked for me a couple of times.

Chipped shots are done by holding LB or L1 when you shoot, and are actually useful this time around. I wouldn’t suggest attempting a chip unless you can see that the opponent’s keeper is a couple of yards off his line. Make sure you kick it when the keeper is a good few feet away from you as well, so that he can’t smother the ball. In a strict one-on-one situation when the keeper is rushing out to you, trying to finesse the ball around him is probably the safer option as long as your player has decent Finishing and Curve stats.

The standard power shot is certainly not useless in FIFA 14 though. I’d suggest that, unless you have a player with particularly high shot power and you’re in, or just outside, the box, then your best bet is to shoot at the far post. This way, if the goalkeeper does save it, he’s more likely to parry it into danger and you can score on the rebound, or he’ll put it out for a corner.

Corners, and heading in general, seems strong in FIFA 14, so if you have players with strong Heading and Jumping stats then try and feed the ball to them in the air. Corners are definitely good opportunities to score though, so try and make the most of them. They’ve introduced Finesse Headers in FIFA 14, which are done by holding RB or R1 when you head the ball, and I find these are particularly lethal.

Finally; through balls. Both standard through balls and lofted ones can be extremely effective if played at the right time and with the right pace. Practice using them and you’ll soon be playing your striker through on a goal-scoring opportunity in no time.

Hopefully this is enough to get you scoring a few more goals, if you haven’t already, be sure to check out Attack of the Fanboy’s review of FIFA 14, and come back soon for a guide to Ultimate Team from me as well.