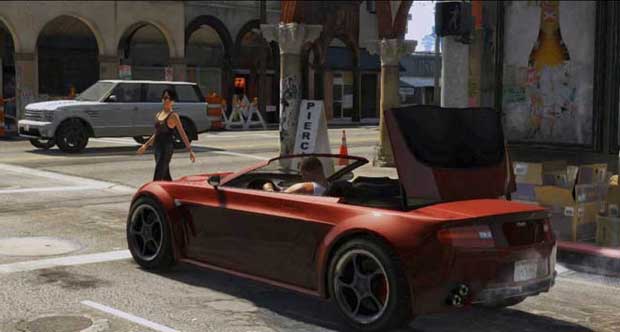 Rockstar has officially come through on their promise to reveal the next installation in one of gaming’s most popular and controversial franchises, and the debate as to where the series is headed next can now come to an end. It’s a familiar place with some recognizable places and landmarks – Los Santos, the fictional portrayal of Los Angeles that was the setting for Grand Theft Auto: San Andreas back in 2004, will be your playground once again in Grand Theft Auto V, and it has gamers such as myself salivating over the possibilities of the experience.

Though we can confirm through the sights from the trailer that players will be re-visiting Vinewood (the game’s fictional version of Hollywood), it remains unknown if the other surrounding cities from San Andreas such as San Fierro and Las Venturas, depictions of San Francisco and Las Vegas, respectively, will return.

Like any quality film teaser, GTA V’s new trailer highlights one subtle, yet enormously major element that is essential to any work of entertainment – a guy with an intriguing backstory. We don’t know what his name his, where he comes from, or what his intentions are. We know only that he is looking to retire from a particular “line of work” (crime, most likely) and become more similar to that all-too clichéd “family man.” If we’ve learned anything from past Rockstar games, our main character will, by unforeseen circumstances, be gradually dragged back into the life he once sought to leave behind and it will ironically take drastic undertakings in criminal activity in order to get away from it once and for all.

This introductory trailer for Grand Theft Auto V may be less than a minute and a half long, but its short length doesn’t stop it from being action-packed and extremely enticing. Putting aside the trademark montage of police encounters and car chases, the teaser reminds us of the importance of that quintessential, increasingly forgotten single-player experience, and perhaps most of all, why Rockstar excels so much at crafting them.

Take John Marston in Red Dead Redemption, or Niko Bellic in GTA IV, for example. These characters are not only set against an epic, immersive backdrop, but their personal stories and goals involve us as gamers on a deeply emotional level. We empathize with Marston and his yearning to exit the life of an outlaw, instead choosing to be an integral part of his family. Similarly, Niko and his innocent view of “the American Dream” quickly turns into a sordidly realistic vision as it shows the protagonist that vengeance does not necessarily merit a new beginning.  Rockstar presents us with digital narratives that few developers would even dream of undertaking, none of which are able to bring such undertakings to a fully engrossing and fluid coherency.

It is this cycle of misdeed and subsequent rebirth with which Rockstar forms their wholly unique and poignant tales. We become sucked into the perspective of the protagonist as they lay-out an initially straightforward strategy on how they are to go about succeeding in an area that is inhospitable to them, yet their plans gradually begin to unwind as the character becomes subjected to the criminal underbelly and zany characters that are necessary to progress their ambitions.

The Grand Theft Auto V trailer also showcases perhaps the best quality that the team at Rockstar possesses – setting construction. The magnificently grand sunsets of Red Dead Redemption as you walk down an arid desert path, the striking realism of an imposing portrayal of Times Square in GTA IV, or the mise en scene noticeable in L.A. Noire as you cruise down a busy 1947 Los Angeles street in a Chevrolet Fleetmaster Convertible. Rockstar unquestionably promotes exploration, and from the looks of the GTA V trailer, Los Santos and its surrounding areas will be chalk full of explorative possibilities. Vast mountainous landscapes and urbanized skylines accompanied by an epitomizing West Coast beach location, as well as the luxuriant, corporate environment contrasted with an impoverished and deprived makeshift town under a bridge should all combine to make for some interesting and varied mission sequences. They should also combine to form a relevant social commentary that Rockstar has shown it is capable of producing.

Again, the trailer may not be long, and it may not show us as much as we’d like. Yet it does tell us one thing, if nothing else. That is, when Grand Theft Auto V finally releases, we’ll undoubtedly rediscover the magic of immersive, open-world, single-player gameplay all over again. Besides, the trailer also shows some great cars just waiting to be jacked, and speeding down Sunset Boulevard in one of those toys will be worth the price point alone.