SMITE Goes ‘To Hell And Back’ In World Championship Trailer

Hi-Rez Studios is gearing up for the SMITE World Championships in Atlanta, Georgia this weekend and released a new cinematic trailer for the PC and Xbox One MOBA. You can check out Bellona, Ymir, and Loki laying the wood to Thor, Sun Wukong, and Neith after paying the Fire Giant a visit.

The SMITE World Championship 2016 starts Thursday, January 7 and runs through Sun, January 10. Professional teams from all over the world will descend upon the Cobb Energy Center in Atlanta, GA to compete for a $1 million prize pool.

The punk rock soundtrack for the new cinematic trailer is slightly out of place, but the overall theme is split between one side in a MOBA match facing down the Fire Giant and the result of the overpowering buff they receive. Hence, the red glow in the eyes of Loki, Ymir, and Bellona and cheeky smirks.

SMITE’s showcase at the World Championships this weekend will also give Hi-Rez Studios a chance to promote upcoming updates to its most popular and profitable game. A new Japanese Pantheon of gods will be revealed with the sun goddess Amaterasu. Her character art was teased in a Twitter post by Hi-Rez President Stew Chisholm in a Twitter post promoting SMITE Magazine. 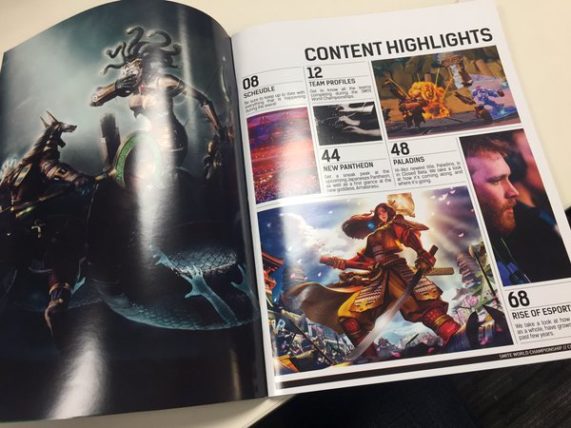 The new Hi-Rez Studios hero shooter, Paladins, will also be available to try out for attendees of the SMITE World Championship. It’s sure to be featured in one of the panels during the event as well.

It won’t be only PC players participating in the SMITE World Championships. The Xbox One version of the game will be hosting an invitational tournament between four teams with a $175,000 prize pool on the line.

Those interested in watching the SMITE festivities can tune into the SMITE Twitch channel.