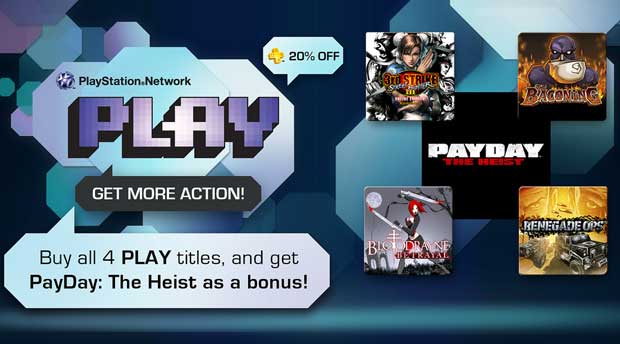 Sony just recently announced a new program that will look to rival Xbox 360’s Summer of Arcade.  The program which has been described as the first of an annual occurence, will see Sony release four downloadable PSN games and offer partcipants DLC for each game as well as new theme with each pre-order.  Better yet, if you purchase all four titles, you’ll get a fifth title absolutely free.  The promotion runs until September 20th, 2011 with pre-orders to open on August 10th.

This year’s games that will be involved in the promotion are Street Fighter III: Third Strike Online Edition ,  Deathspank: The Baconing, Blood Rayne: Betrayal, and Renegade Ops.  Purchasing these four titles will get you a PSN voucher for the PayDay: The Heist.

With Payday: The Heist being the crown jewel in this lineup, you’ll need to do the math on whether the other game’s pique your interest or not.  PSN Plus subscribers will see a significant discount on the titles.