Sony Retires The Killzone Website and Seemingly the Franchise for Good

Killzone fought well on the battlefield but could not keep up with the other big entries in the genre. The critically and beautifully acclaimed Killzone, made by Guerrilla Games, website has been shut down with a redirect to the PlayStation main website.

Killzone developer Guerrilla Games, known for making some incredibly sticking video games have seemed to be finished with the franchise that made them popular. After years of working on first-person shooters and the underwhelming Killzone Shadow Fall, Guerrilla Games surprised players around the world with the companies first open-world action game, Horizon Zero Dawn. After such great success, the game has been ported to PC and a sequel in the future. This has most likely lead to Sony and Guerrilla Games agreeing to let Killzone go as Horizon has garnered much success compared to the mediocre reception of Killzone Shadow Fall.

Along with no longer having to compete against the big multiplayer games that sell in abundance, Guerrilla Games has found further success in the creation of the Decima Engine, which also helped Hideo Kojima with his latest title, Death Stranding. 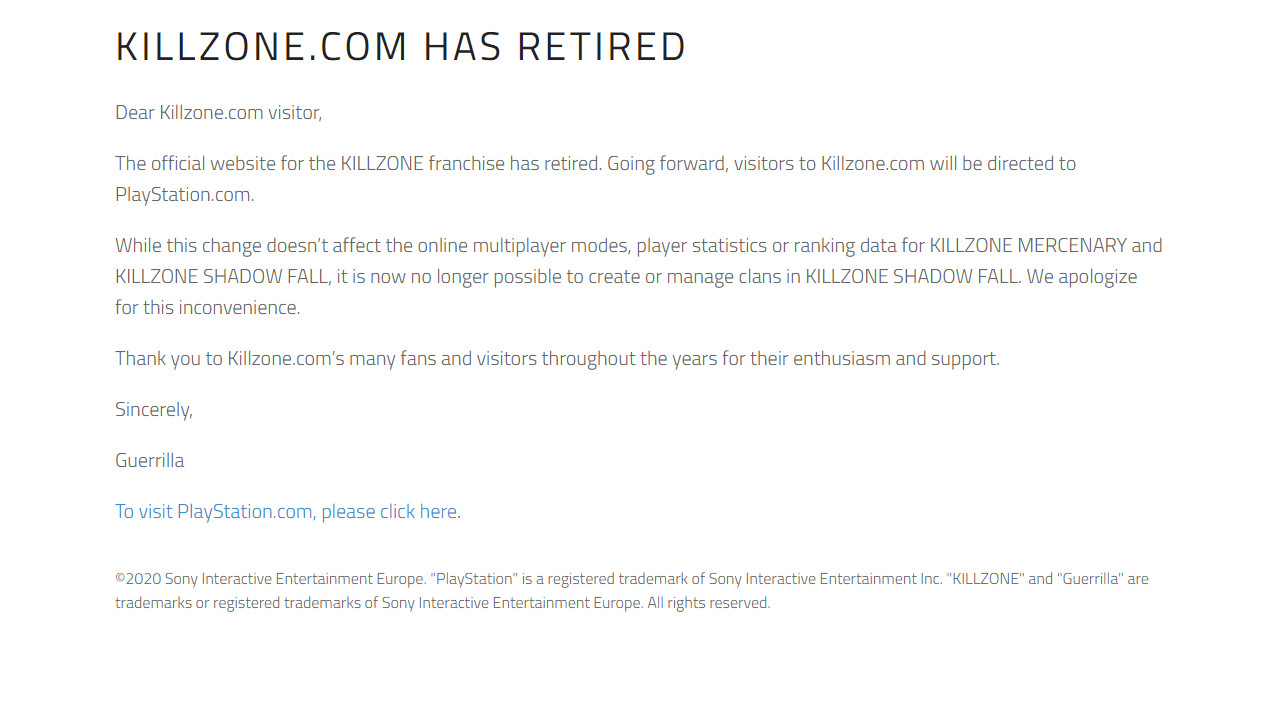 With Guerrilla showing extreme promise in storytelling and technical prowess they have recemented themselves in the marketplace as more of their own identity instead of a, more or less, pretty first-party-multiplayer-shooter company to be drowned out by the likes of Activision’s Call of Duty and EA Games Battlefield. That is not to say that Killzone may see a resurgence way in future if the trend of Hero Shooters die down and Military Shooters come back in a bigger focus.

With Killzone now, seemingly, officially retired players should be expecting more story-driven content from the studio along with other studios getting used to the Decima Engine which has yet to show its potential in other genres.

Fans know of the upcoming Horizon Forbidden West but not of what Kojima’s next project is. Hopefully, gamers will see another company will take up the Decima Engine and see more to come from the creative power of first-party PlayStation Studios with Guerrilla’s technical abilities.