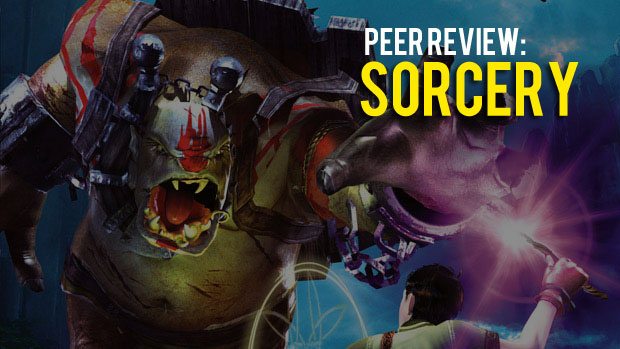 Two years ago, Sony wowed the gaming world with a game that seemingly showcased nothing but potential for their PlayStation Move motion controller.  Letting you take control of a spell casting sorcerer’s apprentice, the Move controller was a great fit for the game.  Sorcery is a bit late to the PlayStation Move party that started in 2010, and for the most part critics are finding the game middling.

Digital Chumps – 88 – The best Move game available, and one of the best motion game experiences on any platform I’ve experienced.

As if by magic, it seems that Move has finally found its happily ever after.

PSX Extreme – 80 – On the one hand, this game really shows how the Move can be extremely entertaining, even if it doesn’t necessarily showcase its technological capability. There’s also the lovely presentation and style, which I adore, and the variety, accessibility, and pacing that really turned out great. On the other hand, it’s too short, the advanced spells don’t always work, and adults may find it a tad underwhelming.

PlayStation Official Magazine – 80 – Adventurers both young and old will appreciate the frantic battles against a range of fairytale monsters in medieval villages and deep underground caverns. As if by magic, it seems that Move has finally found its happily ever after.

IGN – 75 – One of the best PlayStation Move games, but I think most gamers will question why and how Sorcery took so long to create. With a short adventure, no replay value and no online functionality to speak of, Sorcery is a one-off. A fun one-off, for sure, but a one-off that likely won’t push PlayStation Move controllers off the shelves.

Game Informer – 68 – I like Sorcery, but the Move controls hold it back. It could have been a fun action game with an engaging story and environmental puzzles (I use the term “puzzle” generously, as they are all incredibly simple). Instead, Sorcery prepares you to hang framed pictures in your house by making you pretend to hammer a wall for five or six hours.

Sorcery provides a few hours of inanity that can be gratifying, if in a slightly underwhelming way.

Destructoid – 60 – For those desperate to use their Move controllers in something exclusively centered around the Move, Sorcery provides a few hours of inanity that can be gratifying, if in a slightly underwhelming way. Still, the game’s chaotic camera and unwieldy controls can frustrate, not to mention the alarming tendency for the PS Move to need consistent recalibration.

PlayStation Lifestyle – 55 – Sorcery is like baking a cake, but with only a teaspoon of sugar, one egg, a pinch of flour, and a tablespoon of baking powder; all of the ingredients are there, but there’s not enough of each ingredient to make the magical game that PlayStation Move owners have been looking for.