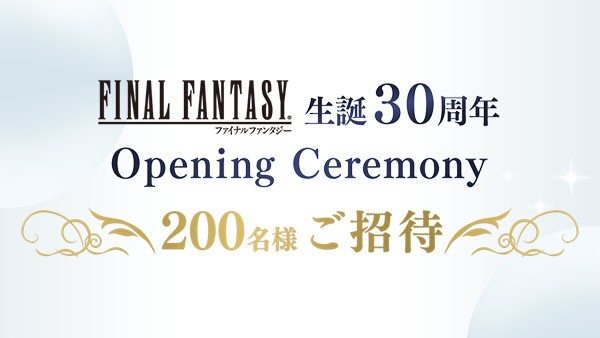 Square Enix has announced it will be holding a 30th Anniversary event for the Final Fantasy franchise next month. Some exciting announcements are expected to be made.

Not much was announced by Square Enix on the official website, but they are calling it the “Final Fantasy 30th Anniversary Opening Ceremony”. This means they might hold even more events later in the year to celebrate three decades of the franchise’s history.

This opening ceremony is being held at Toha Cinemas in Roppongi Hills. Many special guests are expected to attend the event and lots of projects are to be announced.

Some 200 Square Enix members in Japan are invited to the event. Sadly, details are scarce right now, but we should know more about this exciting event in the coming weeks.

There was a rumor posted a while ago that Square Enix is celebrating the franchise in style. It said the first part of the Final Fantasy 7 Remake will be out in 2017 and they are also releasing a special collection that has the first nine games in one package.

We’re not sure if that rumor was true, but it appears that Square Enix is wanting to celebrate the occasion in a big way. Final Fantasy 15 just came out and is selling quite well in the West. This means that the franchise is still going strong and fans are hungry for more.

Hopefully the Ff7 Remake is able to be out in 2017. The game is looking great so far. It’s kind of cool that it’s coming out in multiple parts as it would have been too long of a wait if they had to finish the entire game before it got released.