Super Smash Bros. 3DS XL Coming To US In Two Colors, According To Leaked Walmart Ad

The latest news in the world of video games at Attack of the Fanboy
September 5th, 2014 by Dean James 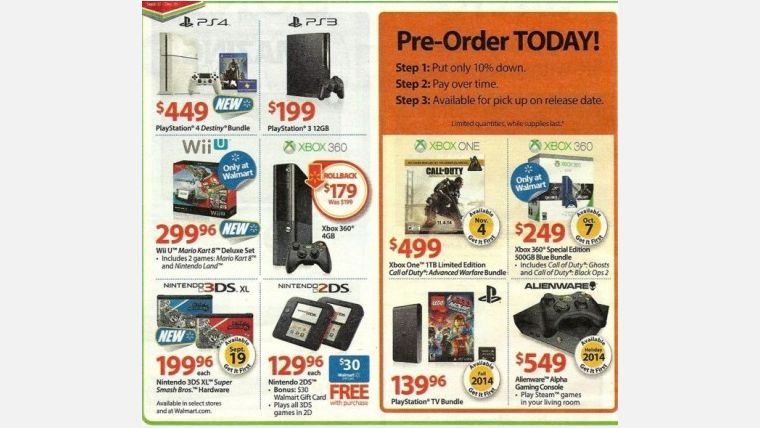 Super Smash Bros. is set to release in less than a month in the US, so needless to say, the excitement levels are reaching a critical mass. There is still time for a few more reveals prior to the release, including details of one of Nintendo’s worst kept secrets in the US, the Super Smash Bros. themed Nintendo 3DS XL. We learned of this special 3DS XL bundle through the Nintendo UK Twitter account last month, but had no confirmation of it coming to the US, until now seemingly.

Very recently, a source known for leaking special edition Nintendo products teased that the handheld would be coming to the US at launch of Super Smash Bros., and that we might even be getting a special blue edition instead. Now, according to a leaked Walmart ad, it appears we may in fact be getting two separate Super Smash Bros. 3DS XLs for the game, the red one as we’ve seen in the past, as well as a brand new blue version of the special edition handheld.

The other interesting piece of information is that the ad mentions a release for September 19, so that likely means the US version of this handheld will not be coming with Super Smash Bros. 3DS pre-installed like in Europe, as the game itself doesn’t release until October 3. This also happened with the Yoshi’s New Island themed Nintendo 3DS XL as well, so it wouldn’t be a huge surprise.

What do you think of this new blue version of the Super Smash Bros. 3DS XL? If you plan on buying one of these, which color are you leaning towards getting right now?