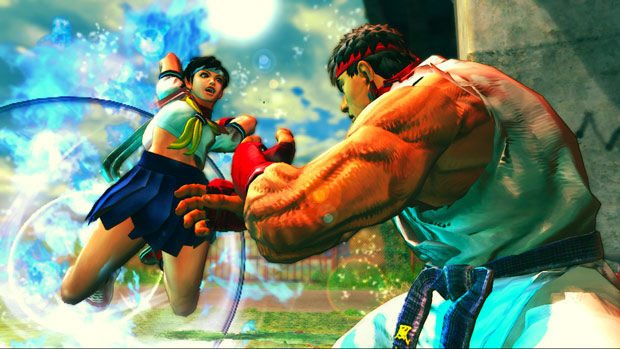 The first preview of Super Street Fighter IV 3D has hit the net, and unsurprisingly it comes from the Nintendo World conference being held in Japan.  The upcoming 3D fighter from Capcom for the Nintendo 3DS is said to be impressive and one of the best examples of the 3D capabilities of the device.

“The game uses 3D in three ways, and they all work brilliantly. Most superficially, there’s the added depth the 3D effect provides for non-gameplay screens. The character select screen, for example, looks like it’s layered, with your character artwork on one layer, the character selection icons on another layer, the text on another layer, the world map on the far back layer, and so-forth. It’s a cool effect that has to be seen. The game uses similar layering effects for all the splash screens. ” said Gantayat.

“Finally, and this was most surprising for me, the game’s new over-the-shoulder view, referred to officially as “Dynamic View,” is actually playable thanks to the use of 3D. To play this mode, you have to separate your senses from the fact that the action is tilted into the screen and play just like you would when playing in 2D. This proves to not be difficult, as the gameplay is still strictly 2D.” – he continues.

With 3D turned on, this viewpoint works, although I’m not sure if I’d necessarily want to play the game in this fashion all the time. I tried the mode with the 3D turned off, though, and found it to be totally unplayable, presumably because of difficulties judging depth. It looks like Dynamic View really depends on the 3D effect, making it unique amongst most of the 3DS games at Nintendo World.

Super Street Fighter IV 3D is scheduled to release at launch with the device in February.