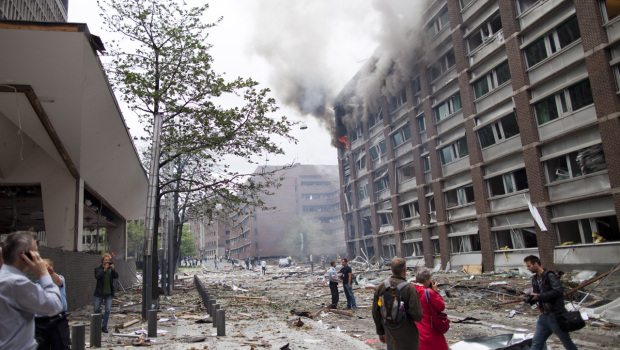 The suspect behind the recent terrorist attacks in Oslo, Norway claims, via a manifesto, that he used Call of Duty: Modern Warfare 2 as a type of training simulation to prepare him for yesterday’s events. Though police have not officially revealed his name, the man has been identified by local media as Anders Behring Breivik, a 32-year-old Norwegian.

Seven people have been confirmed dead from the bomb explosion that shook the Norwegian capital of Oslo as police said that the explosive was set-up in a car. At least 85 others were killed in a shooting at a youth camp in nearby Utoya Island, bringing the current death count to 92. Official sources and social media indicate that Breivik might be a right-wing Christian fundamentalist who may have had an issue with Norway’s multi-cultural society. It may explain why he targeted a politically-partisan youth camp organized by the Labour Party which currently holds power in the country.

Breivik is now being linked to a 1,500 page manifesto that lists popular FPS Call of Duty: Modern Warfare 2 as a means of training for what he believes is an impending war with Islam. He writes:

“I just bought Modern Warfare 2, the game. It is probably the best military simulator out there and it’s one of the hottest games this year. … I see MW2 more as a part of my training-simulation than anything else. I’ve still learned to love it though and especially the multiplayer part is amazing. You can more or less completely simulate actual operations.”

He also believes that using what he considers social and cultural “taboos” such as MMOs, one can disguise their true motives and can continue researching and preparing for them undistracted. Breivik claims, “using social taboos is an extremely effective method from preventing people who know you well from digging too much.” He then continues:

“For example, tell them that you have started to play World of Warcraft or any other online MMO game and that you wish to focus on this for the next months/year. “This “new project” can justify isolation and people will understand somewhat why you are not answering your phone over long periods. Tell them that you are completely hooked on the game (raiding dungeons etc). You will be amazed on how much you can do undetected while blaming this game. If your planning requires you to travel, say that you are visiting one of your WoW friends, or better yet, a girl from your “guild” (who lives in another country). No further questions will be raised if you present these arguments.”

When more details come to light in regards to the meaning behind these attacks and after the media begins to thoroughly read through Breivik’s writings, expect a familiar media panic with the sole purpose of vilifying the gaming industry and “the violence it perpetuates.”  Unfortunately, media sensationalism when coupled with the emotional aspect associated with horrific atrocities such as this one may effectively end the success gained following the industry’s recent victory against the State of California.

Breivik speaks specifically about the concept of isolation when playing an MMO as a type of “cover” that would allow a person to continue on with more sinister actions and prevent people from asking further questions. Gamers are well aware that people associated with the subculture are commonly misrepresented as being anti-social recluses and though this stereotype is constantly being disproved, psychopathic lunatics like Breivik will always prevent the medium from gaining ground. It’s truly an unfortunate circumstance for any advocate of the gaming industry should the media decide to ignore the entire story and focus on labeling Breivik as a gamer first, sociopath second.