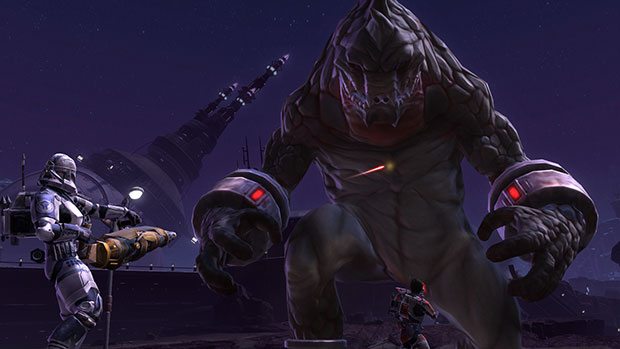 Star Wars: The Old Republic, a MMORPG that launched less than a year ago, has completed its transition to free-to-play. Players can now download, play, and complete the storylines of all eight Star Wars classes, up to level 50 for free.

The MMO saw modest success in its 2011 launch, but apparently has had some problems keeping players engaged and paying monthly subscription fees to play the game. A deep story telling experience with an unprecedented level of detail, dialogue, and other color for the massive online world were touted by critics upon release.

Perhaps more a casuality of an industry paradigm shift than poor game design, everyone will get a chance to experience The Old Republic on the free, starting today. See the Press Release below, for more details.

“We want to give our players the freedom to enjoy Star Wars: The Old Republic when and how they want,” said Matthew Bromberg, General Manager of BioWare Austin. “There has never been a better time to start playing with us.”

· Get ready for an action-packed adventure to earn control of one of the galaxy’s most deadly Assassins, HK-51. Submerged beneath the icy surface of Belsavis lies a derelict ship and if you are brave enough to venture through the wreckage, you will embark on a mission that ultimately rewards you with a powerful new, yet familiar, ally the ruthless Assassin Droid, HK-51.

· Explore Section X, a previously untouched area of the prison world of Belsavis. The Dread Masters’ servants are searching for a powerful and ancient weapon. Fly to Section X and secure the target of their search to be richly rewarded.

· Travel to Denova to take on Operation: Explosive Conflict – now with a Nightmare Mode! Teams who complete in this new mode can earn the final pieces of the Dread Guard gear set and a brand new mount that will be sure to cause tank envy!

Star Wars: The Old Republic is a story-driven, massively multiplayer online (MMO) game with a Free-to-Play option from BioWare and LucasArts. Set thousands of years before the classic Star Wars movies, players team up with friends online to fight in heroic battles, explore a galaxy of vibrant planets and experience visceral Star Wars combat, all set to a sweeping musical score. Players are asked to join forces with either the Galactic Republic or Sith Empire and choose one of eight iconic Star Wars characters, including the Jedi Knight, Jedi Consular, Smuggler, Trooper, Sith Warrior, Sith Inquisitor, Bounty Hunter and Imperial Agent.