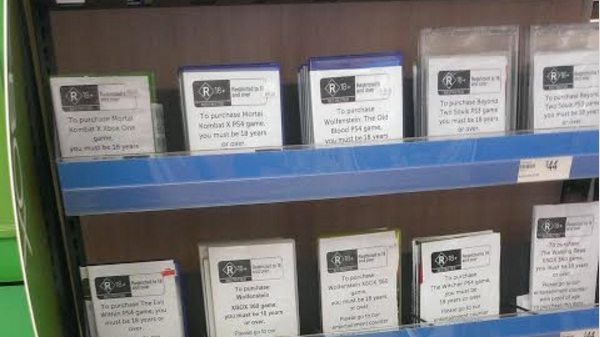 To prevent children and parents from buying R18+ video games, Target Australia is using plain packaging to display on its store shelves.

The above picture was posted by a user from NeoGAF from his local Target store in Australia. As you can see, the video game packaging just shows the big R18+ logo and nothing else.

Plain packaging is supposed to discourage young people and parents from buying games that they shouldn’t be playing. This is because plain packaging looks unattractive compared to say cool box art that features Sub-Zero and Scorpion on the cover.

Target Australia has been strict for the past two years as it pulled Grand Theft Auto V from all of its stores due to bad feedback from parents. To uphold its “family friendly image”, the retailer decided to ban the game entirely.

Bear in mind, Target is only doing this on its own so it’s not a decision made by the Australian Government. Shoppers can still look at the normal covers for games in stores such as EB Games and JB Hi Fi.

Some of the games affected by this are Mortal Kombat X, Wolfenstein: The Old Blood, Watch Dogs and more.