The 20th Anniversary Gray PS4 May be Sold Out, but you can Pre-Order the Controller and Headset Now

The latest news in the world of video games at Attack of the Fanboy
August 17th, 2015 by Kyle Hanson 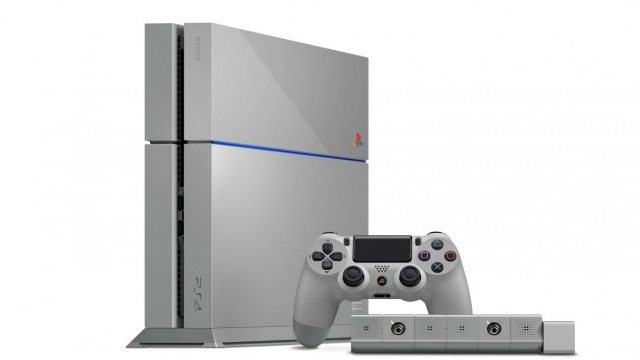 The 20th Anniversary Gray PS4 was the hot ticket item of last year, selling out within moments of becoming available, and garnering huge sums on the re-sell market. The system remains sold out to this day, with no new shipments planned. However, a few peripherals have just been released for pre-orders that might hold over those that missed out.

The DualShock 4 Wireless Controller – 20th Anniversay Edition and Gold Wireless Stereo Headset – 20th Anniversary Edition have just been released for pre-order. The peripherals each sport the same classic PS1 gray color scheme, along with the original PlayStation logo. “Throwback styling blends past with present, featuring both the classic logo and Original Gray color of the first PlayStation with the performance you have come to expect from PS4 accessories.”

The 20th Anniversary Edition Gray controller and Headset are both currently in stock at various retailers. The DualShock 4 runs $64.99, a bit of an increase over the standard controller. The headset retails for $99.99. Both items are listed as having a September 1st release date.

It might not be as cool as having the extremely rare 20th Anniversary Gray PS4, but these can definitely help you feel a bit better about missing it the first time around. Also, for those that did snag one, they can finally get some matching controllers.

Home / Game News / The 20th Anniversary Gray PS4 May be Sold Out, but you can Pre-Order the Controller and Headset Now