The Legend of Zelda: Breath of the Wild: Profiles Serve as Different Save Slots 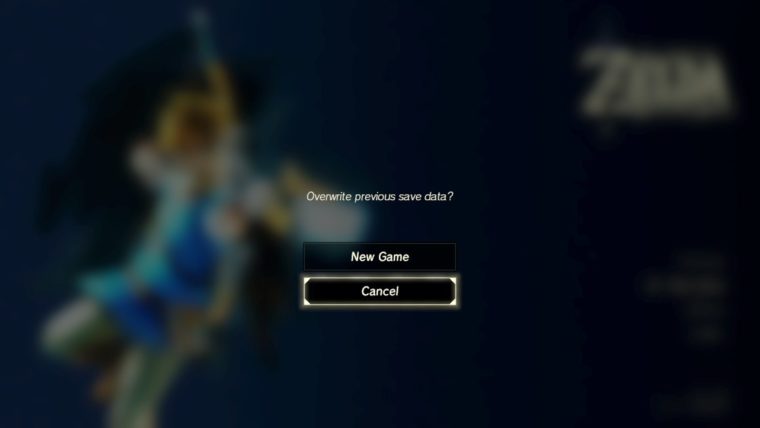 UPDATE: There is a way to have multiple games going at the same time. The Switch allows for multiple profiles on the console. When loading the game from a full stop it will ask which profile to load. Here is where you can load up a different or completely new save file.

Original Story: The Zelda games typically allow you to have a few different saved game slots going at one time, ususally three separate games. It’s been a staple of the series since the very first entry on the NES, but like so many of Zelda’s conventions, The Legend of Zelda: Breath of the Wild changes things. While you can and will have multiple saves, you can only have one single instance of the game going at one time.

I discovered this while playing the game for my hands-on preview which you can read right here. Because playing a game for preview and review requires a lot of messing around with aspects of the game, I usually like to have a few different saves going, and I wanted to jump back to the beginning of the game for some footage. However, once you get to the main title screen you have two real options, continue and new game.

Selecting new game does not prompt you to choose a save slot, as it has done for Zelda games of the past. Instead it gives you the warning above that continuing to start a new game will overwrite your current save state. I would like to go further, testing to see if any of my previous saves remain after selecting this option, but I’m too worried about losing my save file altogether.

My other thought was that I could move my current Legend of Zelda: Breath of the Wild save file over to the micro SD card, then delete it on the system, and move it back once I was done. Searching through the settings menus though I couldn’t find this option. The only thing that was close was the option to delete save files, with no option to move them.

Thankfully, this is a pretty small problem to have. even though past Legend of Zelda games have allowed multiple concurrent saved games to be going, I’m guessing that few have used them. And with the Switch being a handheld device on top of a home console, playing it on the go might have been the reason for the restriction here. Either way, it’s a loss, but not a big one.

It’s also important to note that Breath of the Wild has a fantastic save system. You can save whenever you want, and the game will automatically keep a number of your previous saves, including multiple auto-saves. You can select these from the Load menu in game.

The Legend of Zelda: Breath of the Wild hits Wii U and Nintendo Switch on March 3rd.

Home / Game News / The Legend of Zelda: Breath of the Wild: Profiles Serve as Different Save Slots