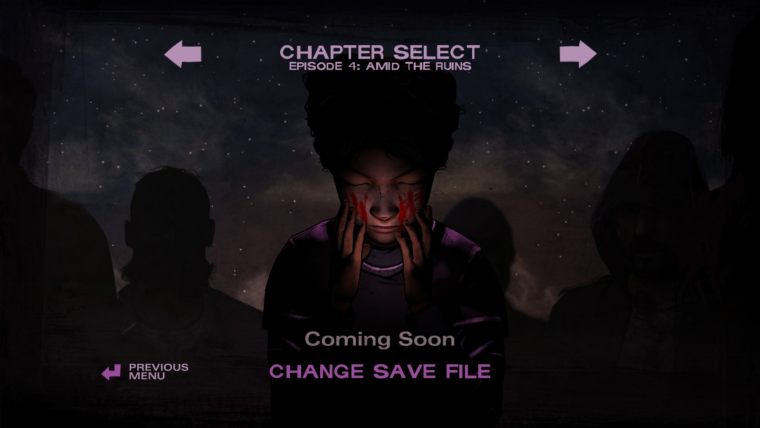 The Walking Dead Season 2: Episode 4 is now available for download on PC, Mac, and US Playstation devices. Xbox 360 and foreign Playstation devices should get the game tomorrow, with iOS receiving it on Thursday. This is the penultimate episode of this season, with only Episode 5 –  No Going Back left before it is over. with two months spanning most episode releases, we should see that final episode hit some time in September.

The various storefronts might take a while to update properly. The Telltale Store version has already become available with (UPDATE: Steam and PSN have updated with the episode, a 710 MB download should kick off as soon as you start your PC, PS3, or PS Vita). If you already own The Walking Dead Season 2 then the game should auto-update on whatever device you own it for as soon as it becomes available to you. Just make sure you leave it on, or in standby mode and the file should be downloaded and your game ready to go fairly soon.

This episode picks up right after the events of The Walking Dead Season 2: Episode 3 – In Harm’s Way. Clementine and her group are in pretty bad shape and will have to survive now that…well I won’t spoil anything else. If you are caught up on the series feel free to check out the trailer above to get a glimpse at the events in store for the fourth episode and be sure to come back here to read our review once it is posted.

With The Walking Dead Season 2 coming to a close within the next few months all eyes are on Telltale for further announcements. I don’t see them abandoning such a valuable property as long as they have a story to tell, so The Walking Dead Season 3 should be inevitable. We also have Tales from the Borderlands and Game of Thrones to look forward to along with a possible The Wolf Among Us Season 2.