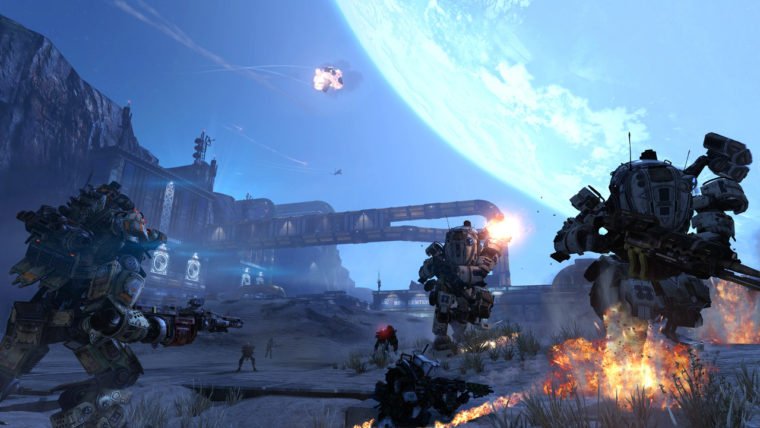 Another week has passed so we get another look at one of the three new maps in the upcoming Titanfall: IMC Rising expansion pack. This is the last update as it details the third and final map included as part of the DLC. Called Sand Trap, the map features a unique location that will allow for some stunning visuals and atmosphere. Unfortunately this update seems more sparse than the last two so we don’t exactly know the story behind the map. We do get some great insight into the design process though.

Level design has a truly special role in a multiplayer game.

Sand Trap’s designer Chris “Soupy” Dionne explained some of the process, which seems to echo a lot of the ideas behind the other two maps in Titanfall: IMC Rising. “One of my main goals with Sand Trap was to use old ideas in new ways. In the center is a buried bunker inspired by the buried architecture in Fracture; this lets Titans stomp around above while pilots scurry below. Across the map are deep trenches that create a well-run highway for pilots; inspired by wall running in Rise they give quick and (relatively) safe routes across the map.”

Some new ideas had to be added of course, “By having a trench network that pilots can use to cross the level, the surface can be left very sparse. This lets Titans dominate on the dunes and creates interesting battles as they crest the hills, often lining up to rain down death on the other side. Pilots shouldn’t have it too easy though, so the trenches have an open bottom that drops into reservoirs of unrefined fuel – instant death by goo!”

All of this adds up to a unique feeling for the map in various game modes. As Chris explains, Last Titan Standing plays out like a tank battle, CTF focuses on the central trench with the surface offering little cover, and Pilot Skirmish gives players long sight lines to take out their enemies.

No release date has been set for Titanfall: IMC Rising, but a special live streaming event will occur on September 23rd on the Titanfall Twitch channel.