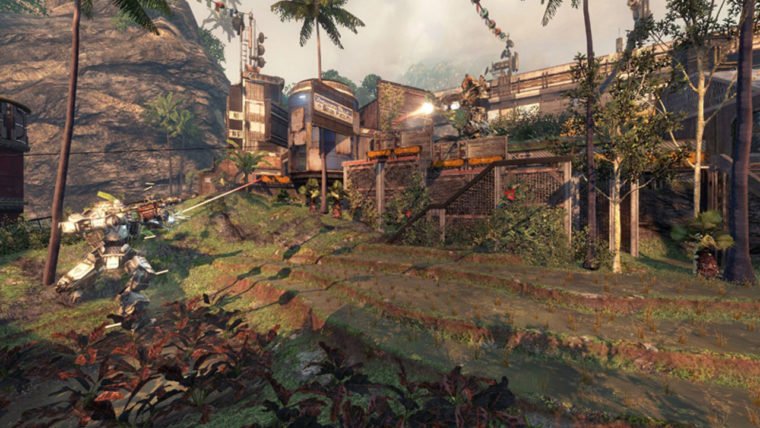 Titanfall: IMC Rising is the third and final map pack coming to the game later this year. As was the case with the last two DLC packs IMC Rising will feature three new maps with various design choices to tailor them for the game. Today we are getting our first look at Backwater, which will be one of the three maps available in Titanfall: IMC Rising.

The original concept was based around some early concepts for Titanfall that we never completed.

Backwater is based in a hidden bootlegging community on the outskirts of the Titanfall universe. It looks to be a circular styled map that will focus action toward the center. It will feature a lot of differing levels of elevation which let Titans fight over the high ground out in the open fields. For Pilots, there is a vast underground area which will let them traverse the map easily while avoiding the Titans above.

The central buildings offer the only major shelter if you are caught in the open. To avoid this you can travel from building to building via the abundant ziplines. Respawn says ““No-man’s land” is a term we use to describe larger areas without cover between 2 lines of combat, with the intention of keeping players fighting from designed strongholds until it’s time to push forward.”

The original concept for Backwater came from early ideas for Titanfall such as the rice paddies found around the map. “Early Respawn fans may recognize the first concept art we ever released, starring the infamous Nessie (Roger), as inspiration for Backwater.”

The other two maps in Titanfall: IMC Rising are called Zone 18 and Sandtrap. We should get a better look at those two as the DLC gets closer to its release date. While we don’t know the exact date it will launch we know it will be some time this Autumn. Titanfall: Expedition and Titanfall: Frontier’s Edge are already available and offer three new maps a piece. Each can be bought individually or a Season Pass can be purchased which will give you access to all nine maps.