The latest news in the world of video games at Attack of the Fanboy
November 17th, 2012 by William Schwartz 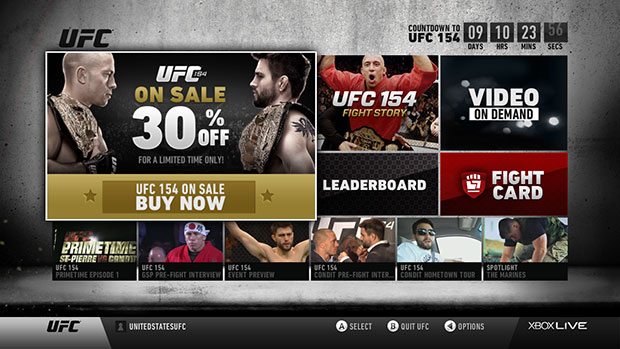 Xbox 360 users that are looking to watch the Georges St. Pierre vs Carlos Condit UFC 154 Title fight tonight, can do so at a discounted rate of 30% off through the console’s UFC app. The App offers access to free live Facebook Prelims with purchase at 6:15 ET, Pay-Per-View Quality HD Streaming, and an interactive fight card that can only be found on the Xbox 360 with the ability to pick fighters and rise up the leaderboards.

The fight comes in both high-definition and standard definition. With the discount, the HD price for the fight is $38.49 and the SD rate is $31.49. Alongside the fights and prelims, the UFC app on Xbox Live has tons of media to get you up to speed on what’s going on in the world of UFC, which can be explored by all Xbox Live Gold Subscribers.

UFC 154 St-Pierre vs Condit is set to go live on Saturday, November 17th at 7pm PST