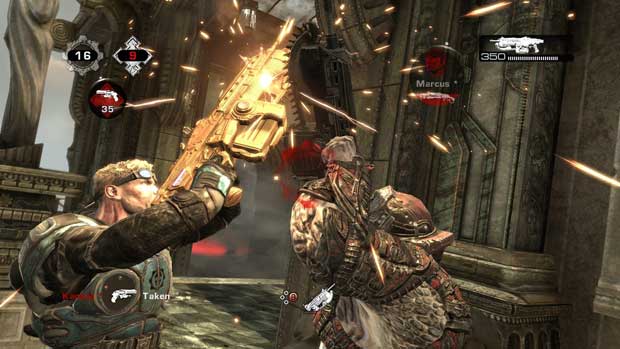 Epic has already told us that we’ll be able to unlock stuff Gears of War 3 from our accomplishments in other Gears titles. Though up until now, those details have been a bit hazy concerning what exactly those unlocks are, and how to accomplish them in the earlier titles. Rod Fergusson revealed a few of the new unlocks while in New York for a promotional showing of Gears of War 3.

Fergusson revealed that the unlocks are “mostly around weapon skins in terms of tying into historical stuff. Two of the ones.. I guess we haven’t announced this but we have to announce it eventually right? Two of the weapons kins are based on historical weapons skins, so if you want the gold lancer and the gold hammerburst in Gears 3, you get them by owning the gold hammerburst and gold lancer in Gears 2. The skins transfer over.”

There are a number of chrome skin unlocks according to the developer that can be accomplished simply for having accomplished something in previous games.  But the developer did note that many of the unlocks are centered around achievements.  So you’ll need to have completed various achievements in previous Gears games to even have a shot at unlocking the weapons skins.  One thing to note though, none of these unlocks are going to give you a leg up on the competition.  They are for a purely aesthetic purpose, then again, if spent that many hours in Gears to reach, say level 100, you should already have a head start on everyone anyway.

Gears of War 3 releases this September exclusively for the Xbox 360.