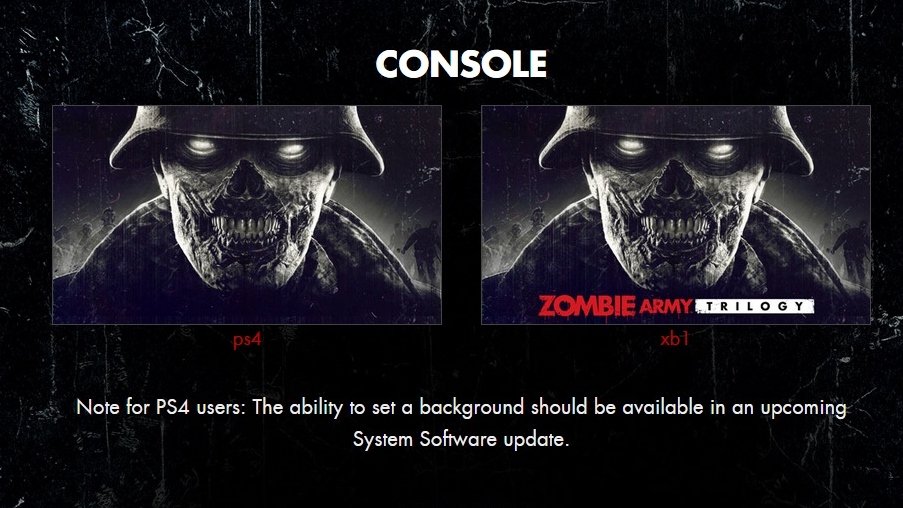 Recently the Xbox One got the ability to utilize custom images for their backgrounds. Now it looks like Sony’s PlayStation 4 isn’t far behind, as the possibility of the feature has been leaked via the official site for the upcoming Rebellion published, Zombie Army Trilogy.

Discovered by Twitter user willydearborn, an image specifically states that a future update will allow users to set their own backgrounds. Fans can sign up for free content on the Zombie Army website and once they verify their email they are brought to the same page that shows the image in question, along with other various wallpapers and content. It is rather interesting that this very requested feature is just silently being talked about and has been basically announced via Rebellion.

Of course it is rather early, so no word how the feature will work but hopefully we will be able to use USB devices and saved images from our console as well. The feature will certainly add a more personalized feel to every PlayStation 4 out there. At the very least it seems that the update will release before the Zombie Army Trilogy title releases in stores next month.

Zombie Army Trilogy is set to release for PlayStation 4, Xbox One and PC on March 6th.

Rebellion’s marketing and PR coordinator took to Twitter in reply to the image featured above. He reached out to TheSixthAxis and released a full statement which can be seen below.

“Sorry Playstation gamers, I’m afraid we’re just as in the dark as you are about the next PS4 update! This is what we get for being organised!

When we were putting together our wishlist for ZombieArmy.com we thought custom console themes would be a cool giveaway.

Lo-and-behold PS4 ‘custom themes’ came out but didn’t include the ability to add custom backgrounds (which we’d already been working on), so we probably do need to tweak the wording in the website to be a bit clearer.

At least, if they do announce custom backgrounds we’ll be the first dev to have them ready. Your move Sony!

Anyway, if you’d like some beautiful Xbox One, smartphone, desktop and (hopefully future-proof) PS4 backgrounds, AND some exclusive Zombie Army Trilogy MP3s, head to ZombieArmy.com and sign up to the newsletter!”