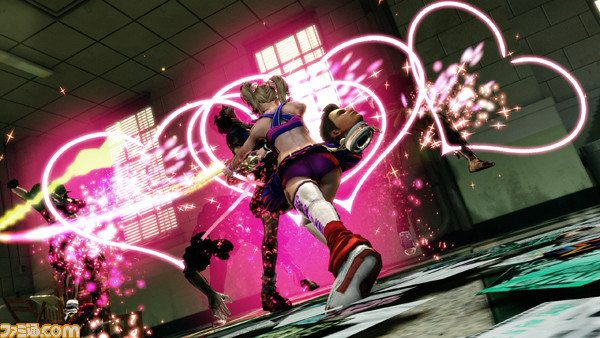 A leak out of the Japanese magazine, Famitsu, reveals what the next game from Grasshopper Manufacturing (Shadows of the Damned) will be. Get ready for Lollipop Chainsaw for the Xbox 360 and PS3!

The details about the game are small only that you play as the cheerleader named Juliet who attends San Romero High School and she is a descendent from a long line of zombie hunters. Soon zombies invade her school and it’s up to Juliet to save the day with her cheerleader acrobatic skills and a chainsaw.

Another detail is that whenever you slay a zombie it shoot pink blood everywhere which (according to Siliconera) will add a pop feel to the game.  Suda 51 is going to be the game’s Creative Director and will be working with Akira Yamamoka on sound. The game is also reported to be near completion and they already have a publisher but unfortunately have no release date. Which I hope is very soon because this game sounds like Dead Rising Tween Edition and I’ve always wanted to play as a cheerleader that kills pink blooded zombies with a chainsaw.