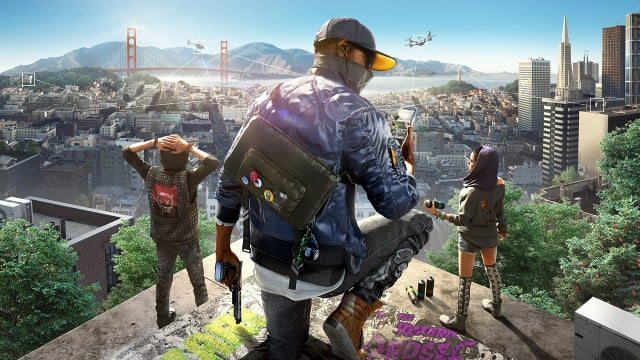 Watch Dogs 2 has been rated by the ESRB today and it gives us a few details of the type of freedom and violent activities that you can partake in.

It has been rated for mature players aged 17 and up. The content descriptors say: Blood, Intense Violence, Nudity, Sexual Themes, Strong Language, Use of Drugs.

The rating summary says: This is an action-adventure game in which players assume the role of a man (Marcus Holloway) who joins forces with a hacker group intent on exposing corruption in the San Francisco Bay Area. As players explore the open-world environment, they can complete mission-based objectives, interact with characters, and engage in combat with criminals and rival gangs. Players use machine guns, shotguns, assault rifles, and explosives to kill enemy thugs and/or civilians; killing civilians, however, may negatively affect their progress. Fire fights are often accompanied by realistic gunfire, large explosions, and blood-splatter effects.

Some sequences contain additional acts of violence: a man bleeding out and dying from a stab wound; a man shot and killed by an officer. The game contains some sexual material: a man selling child pornography over the phone (no sexual acts or nudity depicted); a strip club depicting pole dancers and topless women; brief instances of male and female full-frontal nudity (e.g., a woman in body paint; a man standing with a woman outdoors). During the course of the game, characters are depicted smoking marijuana and using needles to inject themselves with drugs; in one sequence, the player’s screen warps and blurs after consuming mushrooms laced with acid. The words “f**k,” “sh*t,” and “a*shole” are heard in the dialogue.

Watch Dogs 2 will be released for the PC, PS4 and Xbox One on November 15th, 2016. The sequel is set in San Francisco and features a new character and more.