The various ways of murder and assassination in Dishonored

The latest news in the world of video games at Attack of the Fanboy
June 28th, 2012 by William Schwartz 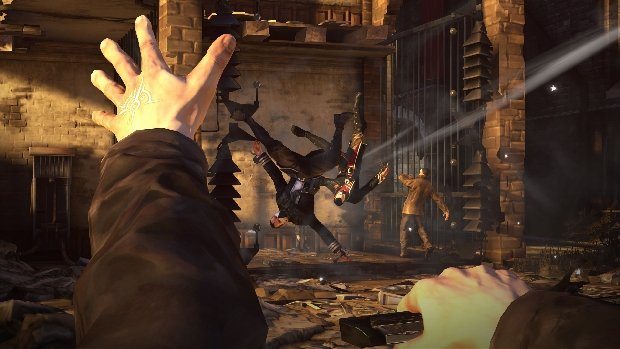 When we went behind the scenes at Bethesda’s E3 booth to view a live demo with Dishonored co-creative directors Harvey Smith and Rafael Colantonio, we anticipated a single walkthrough of a short demo narrated by the developers. What we got instead was not one, but two walkthroughs of the same demo and nearly 20 minutes of gameplay footage. When it was all said and done, we were impressed to say the least. Not necessarily because of the fluid combat mechanics or vitalizing setting, but mainly due to the fact that Smith and Colantonio went through the same exact demo twice and were able to showcase just how much players will be able to control and influence the way each mission plays out solely by their own personal playstyle.

“The first time, we’re going to go though without killing anyone,” said Smith at E3 2012 as he prepared to show the media two unique run-throughs of the same mission. “The second, yeah you guessed it, everyone’s getting killed.”

Thanks to Arkane and Bethesda, you can now watch the very same in-game Dishonored footage we had the opportunity to see a few weeks back at E3. The following two videos feature protagonist Corvo and one major objective. He must assassinate the Pendleton brothers, two corrupted members of Parliament and supporters of the evil Lord Regent. Corvo gains the knowledge that the brothers are frequent visitors of a burlesque-club called the Golden Cat, so he must navigate his way there to take out his targets.

Watch as each demo displays two distinct playstyles – one taking the stealthy assassin route, the other…well, let’s just say it’s a route covered in a lot more blood. When I sat down with Harvey Smith back at E3, he mentioned that the “Chaos” system of Dishonored (a system of morality that will track each player’s ethical decisions) will not only directly affect how certain situations play out later in the game, it’ll also affect the particular ending that you see upon completion. So that’s certainly one thing to keep in mind as you’re slicing and dicing your way through the missions come October.