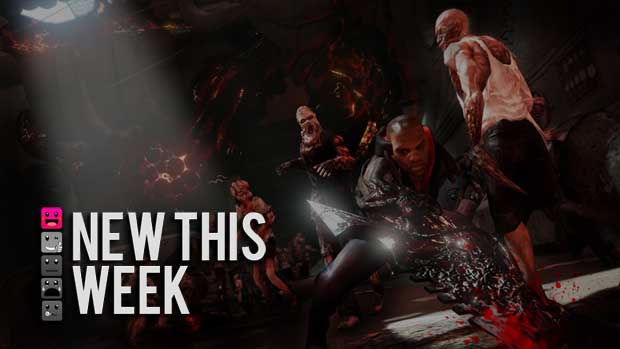 Prototype 2 – PlayStation 3, Xbox 360, PC –  New York Zero is a post-viral wasteland broken up into three distinct districts. The Green Zone is heavily militarized. The Yellow Zone is an overcrowded refugee camp, nothing more than a quarantined shanty town. The war-ravaged nightmare known as the Red Zone is where the Blacklight virus has completely overrun the once-great city’s skyscrapers and population.

UEFA Euro 2012 – PlayStation 3, PC, Xbox 360 – The EA SPORTS UEFA EURO 2012 expansion pack for EA SPORTS FIFA Soccer 12 recreates all the excitement of the official tournament with over 50 European national teams, all eight official stadiums, and all the pageantry and atmosphere of one of the largest and most-watched sporting events on the planet. Compete as your favourite country in an authentic online tournament mode against rival nations in the group stage, progress through the knockout rounds, and ultimately compete for the chance to be crowned the UEFA EURO 2012 champion.

Bloodforge – Xbox 360 – With a brutal combat system, stunning art style, and a deeply compelling story, Bloodforge empowers you to slaughter hordes of demonic soldiers, deformed worshippers, and the gods themselves, using ferocious Rage Kills, devastating Rune attacks, and furious Weapon Combos. Help seal Crom’s fate – and the fate of the rest of the world – in this dark, visceral story of revenge, betrayal, and destiny.

Battlefield 3 – PlayStation Digital – Prepare for full-scale war with Battlefield 3, the third major evolution of the long-running online battle franchise. Using the power of Frostbite 2 game engine technology, Battlefield 3 delivers superior visual quality, a grand sense of scale, massive destruction, dynamic audio and incredibly lifelike character animations. As bullets whiz by, walls crumble, and explosions throw you to the ground, the battlefield feels more alive and interactive than ever before.

Risen 2: Dark Waters – PC – Set several years after the end of Risen, raging titans have devastated the world and pushed humanity to the brink of existence. Subsequently, monstrous creatures have risen from the watery depths of the sea and their attacks have brought all seafaring to a grinding halt. The hero, now a member of the Inquisition, is sent out to find out how to stop the chaos caused by these creatures from the deep. His quest begins with rumors that the pirates who frequent the southern islands are the only ones who know a way to get rid of the creatures once and for all and end their reign of terror.

Shifting World – 3DS – Based on the award winning Shift series originally by Armor Games which has been played by over 16 million players on the web, the Nintendo 3DS version will be the first of the series to hit consoles and introduces an all-new art direction, level editor, and 3D functionality.