New This Week in Video Games | Maybe The Best Kinect Game Ever? 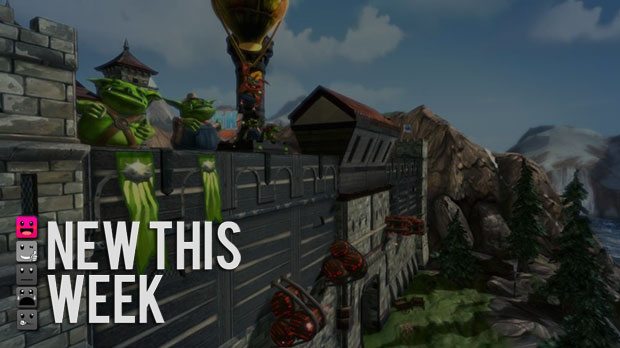 Wreckateer – Xbox 360 – Wreckateer uses the Kinect to put you in control of a massive castle-wrecking Ballista. With the help of Wreck and Tinker, use 6 magic projectiles to travel the land and destroy 60 castles.

Adidas miCoach – PS3, Xbox 360 – Bring the world of miCoach to your living room – train with the best! Train in the comfort of your own home with an all-star training team of athletes from your favourite sport. Earn Fit Points and awards for every bit of exercise you do. Train at home, in the gym and outdoors, tracked by the latest motion tracking technology and portable fitness hardware. Wake up to a whole new community of friends and social network updates. It’s your exercise world, available on your console, on the web or on your smartphone.

Foosball 2012 – PS3, Vita – Enjoy one of the most popular sports in the world from the comfort of your home on PS3™, or enjoy it anywhere on PS®Vita and challenge your friends in a local multiplayer for up to four players and online multiplayer and leaderboards.  Foosball 2012 brings an unparalleled level of connectivity between PS3™ and PS®Vita, supporting cross play, gameplay continuation and offering both the PS3™ and PS®Vita versions together, for a price of a single game.  Running in astonishing FullHD resolution, 60 frames-per-second graphics and with support for PlayStation®Move controller on the PS3™ and supporting the innovative features of PS®Vita, like rear touch pad and accelerometer-powered controls, Foosball 2012 is the supreme experience for any PlayStation® owner.

Prototype 2 – PC – Prototype 2 takes the unsurpassed carnage of the original Prototype and continues the experience of becoming the ultimate shape-shifting weapon. A devastating viral outbreak has claimed the lives of Sgt James Heller’s family and transformed him into a PROTOTYPE. Powered by incredible new shapeshifting powers and abilities, you must hunt, kill and consume your way across the infected wasteland of New York Zero to take revenge on the man responsible: Alex Mercer.

Malicious – PS3 – Malicious is an entirely original action game for the PS3. You are a “Spirit Vessel,” called into the world by the Prophets to vanquish evil. Armed with the “Mantle of Cinders,” a cloak that can absorb power from destroyed objects as well as shift form, you wage battle with the “Malicious.”