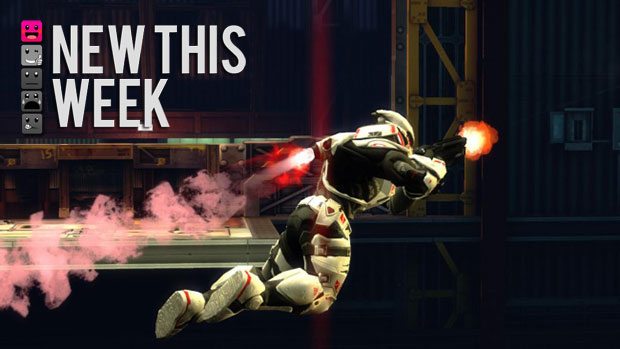 Persona 4 Arena – Xbox 360, PlayStation 3 – Two months after the ending of the hit RPG Persona 4, a new threat has emerged in Persona 4 Arena! During Golden Week, a new rumor begins spreading through town about a mysterious TV program, the P-1 Grand Prix. Visible if you look into a turned-off TV on a rainy night, this fighting tournament broadcasts high school friends fighting one another to the bitter end.

Hybrid – Xbox 360 – Hybrid is a multiplayer third person shooter in which two factions fight for world domination on a persistent world map. Take control of a soldier fighting for the Paladins or the Variants as they race to control the world’s most powerful resource; Dark Matter. Your victories on the battlefield directly affect the course of the war!

Symphony – PC – A mysterious entity is absorbing and corrupting your music before your very eyes. You must battle through your own song collection, discover items, customize your ship and fight boss enemies to liberate the Symphony of Souls and reclaim your music!  Symphony is one of the most music-driven games ever made. In this vertical shooter, re-experience each of your songs as it becomes a unique battlefield driven by intensity and tempo.

Sound Shapes – PlayStation 3 , PS Vita – Equal parts instrument and game, Sound Shapes gives everyone the ability to make music. Play through a unique campaign that fuses music and artwork into a classic 2D platformer, featuring artwork by Pixeljam, Capy, Superbrothers and more, with music by I Am Robot and Proud, Jim Guthrie and Deadmau5. Create your own unique musical levels with all of the campaign content and share with the world. Sound Shapes creates an ever-changing musical community for everyone to enjoy at home or on the go.

The Amazing Spiderman – PC –  Harness Spider-Man’s powers with Manhattan as your playground! Set shortly after the events of Columbia Pictures’ new film, The Amazing Spider-Man throws New York City’s brand new hero back into free-roaming, web-slinging action, as he protects the Big Apple from a deluge of unimaginable threats. • Spider-Man’s Triumphant Return to New York –Everybody’s favorite web-head is back in Manhattan with the return of the fan-favorite, free-roaming, web-slinging gameplay.

Deponia – PC – Garbage as far as the eye can see. Deponia may not be paradise but its residents still have dreams. None more so than Rufus. He is fed up and can’t wait for the day when he finally leaves his home village of Kuvaq. For now he must continue his hair-raising attempts to escape this god-forsaken place.

Hero Academy – PC – Test your skills in this light-hearted battle between friends! Heroic teams have gathered to engage in friendly contests on the Academy playfields. Will your team emerge triumphant?  Enter a world of swords and magic, and challenge friends old and new to a contest of tactics and skill. From the human Council to the mysterious Dark Elves, every team needs a fearless captain to lead them to victory. Only those that leverage their team’s strengths and capitalize on their opponent’s weaknesses will protect their crystal and win the day. The Academy extends a warm welcome to all – whether they’re already heroes, or simply heroes in training!