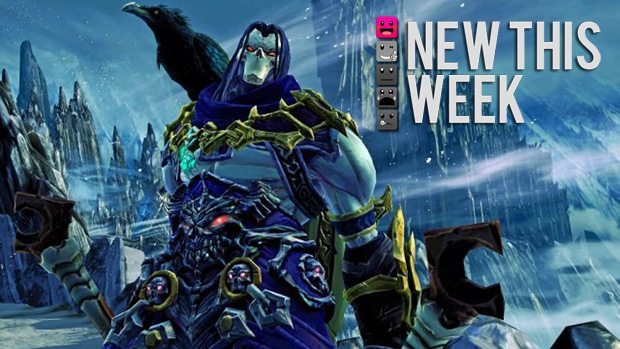 Darksiders II – Xbox 360, PS3, PC – Awakened by the End of Days, Death, the most feared of the legendary Four Horsemen embarks on a quest to undo Armageddon. Along the way, the Horseman discovers that there are far worse things than an earthly Apocalypse, and that an ancient grudge may threaten all of Creation. Become the terrifying force which everything fears but nothing can escape. Death Lives in Darksiders II.

Sleeping Dogs – Xbox 360, PS3 , PC – Welcome to Hong Kong, a vibrant neon city teaming with life, whose exotic locations and busy streets hide one of the most powerful and dangerous criminal organizations in the world: the Triads. In this open-world game, you play the role of Wei Shen, an undercover cop trying to take down the Triads from the inside. You’ll have to prove yourself worthy as you fight your way up the organization, taking part in brutal criminal activities without blowing your cover. Torn between your loyalty to the badge and the code of the triads, you will risk everything as the lines between truth and honor become permanently blurred.

Papo & Yo – PS3 – Papo & Yo is the story of a young boy, Quico, and his best friend, Monster. Monster is a huge beast with razor-sharp teeth, but that doesn’t scare Quico away from playing with him. That said, Monster does have a very dangerous problem: an addiction to poisonous frogs. The minute he sees one hop by, he’ll scarf it down and fly into a violent, frog-induced rage where no one, including Quico, is safe. And yet, Quico loves his Monster and wants to save him.

Dust: An Elysian Tale – Xbox 360 – Immerse yourself in a gorgeous hand-painted world on a search for your true identity. As the mysterious warrior, Dust, you must master the ancient Blade of Ahrah to battle dozens of enemies with an intuitive combat system, take on a variety of quests, discover powerful upgrades throughout the massive, open world, and uncover the story of an ancient civilization on the brink of extinction as you fight to uncover your own past.

The Last Story – Wii – The Last Story marks the reunion of two luminaries that helped shape the RPG genre; legendary creator Hironobu Sakaguchi, and internationally-recognized composer Nobuo Uematsu. Gorgeous pre-rendered cut-scenes help convey the full emotions of key story sequences in an epic tale of survival against the odds. The genre is also advanced with an innovative real-time combat system involving strategic party-based commands that include taking cover from enemy fire, destroying environments to gain a tactical advantage, and drawing fire away from your allies to give them time to cast powerful support spells. Once the battle system is mastered, players can test their skills online where co-op and versus mode for up to 6 players can net special rare items.

Drip Drip – PC – Drip Drip is a casual game that has a classic 2D feel with RTS-inspired point-and-click controls.

Enter a world of swords and magic, and challenge friends old and new to a contest of tactics and skill. From the human Council to the mysterious Dark Elves, every team needs a fearless captain to lead them to victory. Only those that leverage their team’s strengths and capitalize on their opponent’s weaknesses will protect their crystal and win the day.